Open Letter from the CEO of Gab.com – The True Free Speech Social Platform

Open Letter from the CEO of Gab.com – The True Free Speech Social Platform : 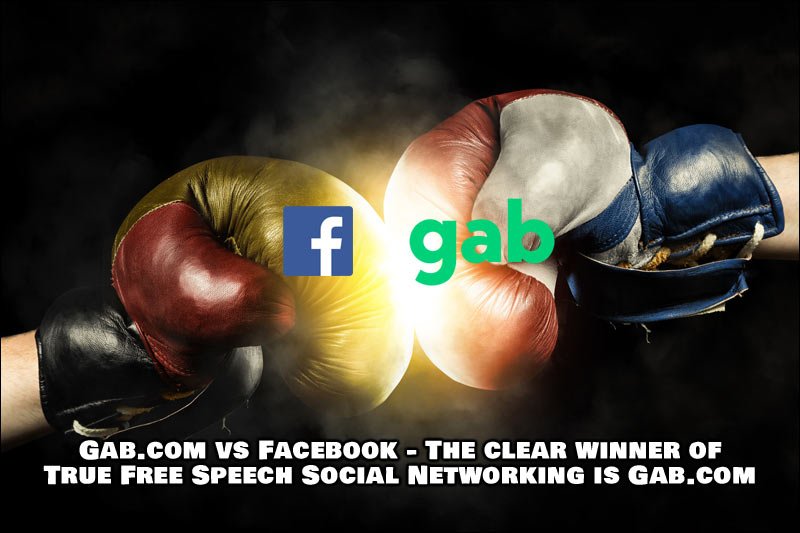 It’s quite obvious the almost anyone now that ‘big tech’ companies including Facebook, Twitter, Instagram, YouTube, are doing their best to silence the voices of conservatives. What we know as ‘free speech’ out in public, ‘big tech’ has their own definition, and that’s ‘what ever they say, goes’ no matter what. True ‘free speech’ is NOT allowed on those listed platforms, and we see it instituted many times a day, affecting millions of users world wide. Post a statement or a meme that ‘goes against their community standards‘ and boom, you’re blocked from using either the entire service, or just select functions. The ‘ban’ can last for hours, or up to months, it all depends on how pissed off they are at you (and how many past infractions you have over a certain period of time. FB keeps violations on your ‘record’ for 12 months). You can state a FACT, and get banned/blocked. That’s OK though, let’s take a step back. It’s THEIR platform. It’s THEIR environment. They own the business you are using, so you must oblige by their rules. If you do not like their rules and guidelines, you are free to go somewhere else, just as if it was a local store down the street from you.

This is where Gab.com steps in. A social media and networking platform that truly does believe in Free Speech. In fact that was their whole purpose in being built. While it’s been extremely tough to pull people away from places like Facebook, Gab has done a very decent job, and their technology is offering some really cool features. Gab will be the place to run to when you have finally had it with the likes of Facebook. The CEO of Gab.com, Andrew Torba, just wrote an open letter which reiterates the company’s stance on Free Speech and what is going on in today’s world. This is a must read, and switching over to Gab.com is also a must. Read the open letter from Gab.com’s CEO here :

My name is Andrew Torba and I’m the CEO of Gab.com.

Gab is a free speech software company. We build open source software with the primary purpose of conserving and exporting the uniquely American value of free speech to the world online. Our most popular product is Gab.com, our social media platform with millions of users from around the world. On Gab the rules are simple: if it’s legal speech, it’s allowed. Illegal content and activity is not allowed. Gab also follows American privacy law in regards to protecting user data. We believe that privacy is a human right and that the dignity of a sovereign individual should be respected. We don’t just say these things, we actively defend these values everyday. For example we regularly protect the privacy of international Gab users by turning down speech-related data requests.

On a regular basis foreign governments attempt to censor or no-platform individuals on Gab for “offensive” or “hateful” speech that is 100% protected by the first amendment and our user guidelines. We reject these requests and in doing so are exporting American freedoms to people all over the world on the internet. We are also proud of our relationship with US law enforcement and the balance of due process, privacy, and free speech to keep criminal activity out of our community. For over three years now the mainstream media and establishment players in the Silicon Valley cabal have smeared Gab because they do not share our values. For holding the values described above, Gab has faced unique challenges on our journey. We have been no-platformed from dozens of service providers including both app stores, hosting providers, domain registrars, payment processors, and even banks. We’ve overcome these challenges by building our own infrastructure and by leveraging censorship-resistant technology like bitcoin.

The rise in the censorship of American citizens by American corporations and the subversion of democracy by those same US corporations is harrowing to me as a Christian American. Silicon Valley companies do not share my Christian values and indeed have a consistent history of silencing Christians online. Free speech is at the forefront of the 2020 election. In just the past year we saw Democratic Presidential candidates and mainstream media personalities calling for Twitter to ban President Trump’s account. Twitter then quickly announced that they will be removing the ability to like, reply, or repost President Trump’s tweets that are “abusive” according to their standards.

This isn’t “democracy” and it certainly isn’t “normal.”

Big Tech’s unchecked power to dictate who can speak, who can make money, and who can exist online is only part of the bigger picture. Big Tech is curating and editorializing the legal political speech of American citizens and limiting the reach and engagement of the President of the United States. Big Tech is socially engineering the American electorate. Studies have shown that biased Google search results can swing and influence elections. Facebook has admitted to conducting psychological experiments on users. Facebook is building a literal mind reading device. Google was working with China to build a censored search engine. Pinterest censored pro-life and Christian content from their site.

Silicon Valley’s bravado has also inspired the Chinese government to project their values of censorship, communism, and control on millions of Americans online. Many of the top mobile game and mobile apps are owned and controlled by the Chinese. Apps like Tiktok have already censored content that criticizes the Chinese government, but not just in China. They are doing it to Americans too. These two versions of the internet are different sides of the same tyrannical coin. This corporate or foreign state-controlled internet isn’t the internet I want my daughter to grow up with. This isn’t the internet the people of the world deserve.

On Gab users are not the product, they are the customer. Gab monetizes by selling an optional service called GabPro. For the cost of a cup of coffee every month, GabPro users can get verified and unlock additional features. We also offer a free speech web browser that automatically blocks all Big Tech ads and trackers. The browser includes a universal comment section across the entire internet. Users can comment on any URL and also see what others are commenting.

What we all need to realize is that together we vastly outnumber Silicon Valley. They only control us only as long as you and I continue to let them do it.
I refuse to allow it any longer. So we are building the free speech internet, and I’d like for you to join us.

What do you think of Andrew Torba’s open letter? Do you agree with him? … Please Comment Below.