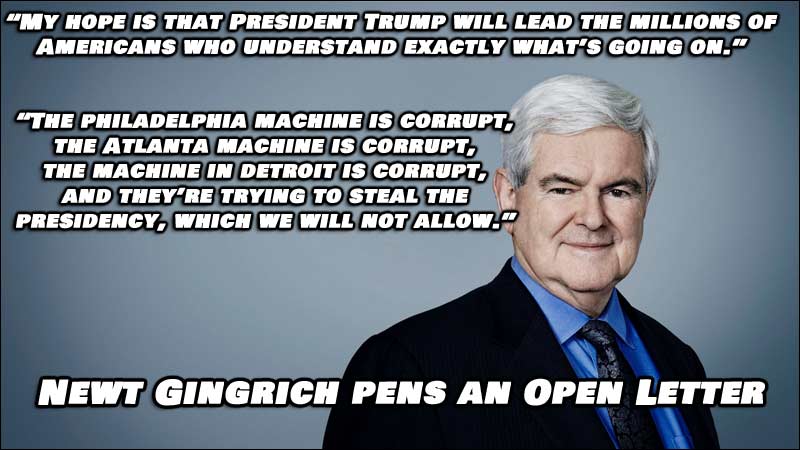 I came across this through former Governor Mike Huckabee and he asked that everyone share this whenever possible. It’s an open letter written by Newt Gingrich (Former Speaker of the United States House of Representatives), and it pretty much hits the nail on the head of what every conservative is feeling and thinking at the moment. .. Give it a read and feel free to share the hell out of it. :

“I’ve been active in this since 1958; that’s 62 years. I’m the angriest I have been in that entire six decades. You have a group of corrupt people who have absolute contempt for the American people, who believe that we’re so spineless, so cowardly, so unwilling to stand up for ourselves that they can steal the presidency, and we’ll wring our hands, bring in a few lawyers, and do nothing.

“I am sick and tired of corrupt left-wing Democrats who believe that we are too timid and too easy to intimidate, and therefore they’ll just go out and steal it…You are watching an effort to steal the presidency of the United States, and this is not about Donald Trump. This is about the American people, [who] have the right, in an honest election, with honest, legitimate ballots, to pick their leader. Or are we now just sheep, to be dominated by the high-tech businesses, the news media, and the various political machines?…This is a crisis in the American system, comparable to Washington on Christmas Eve or…Lincoln at Gettysburg. This is a genuine, deep crisis of our survival.”

Gingrich said that in any precinct in which Republicans were not able to observe, the votes should be taken back –- “strip those votes out, do not count them, because they’re by definition corrupt.”

What are your thoughts about what Newt wrote? .. Please feel free to let us know in the comments below.

If this is true.then when will these people be arrested?
I’m sick of all this,all talk no action. GET IT DONE! WE ARE RUNNING OUT OF TIME

His letter just TOUCHED on the entire fraud! It was TOO short! I’m hoping he has more to say, & shares that with President Trump IMMEDIATELY!!

At this point, Trump should invoke the Insurrection Act , and declare martial law!
All illegal votes need to be tossed out, and only valid, verifiable ballots counted , with military personnel guarding the ballot counting !
If nothing is done to correct all of the illegal, fraudulent activity, and Biden is allowed to gain Presidency , I fear a civil war is imminent …

If I know Trump there is no way he is going to sit back and not save this country. The ones who r voting to get rid of him in such a hurry are up to their ears in corruption. Why in heavens name would they not support our president. We r not idiots we know what they r doing. He has given them enough rope to hang themselves and guess what they did. They r dangling and look foolish. Good will prevail.

Talk is cheap. I have always thought the Republicans were go-along spineless politicians just like the Democrats. OK, what are you now going to DO? Time we got rid of both parties and start all over again…..with reason and logic and not mysticism. If you won’t do it “we the people” will!

We shouldn’t allow this to happen. They are steeling the presidency. I think the military should be activated and we should all vote again under the protection of the US military. Make these crooks do the right thing.

in any precinct in which Republicans were not able to observe, the votes should be taken back –- “strip those votes out, do not count them, because they’re by definition corrupt.
ABSOLUTELY!!!

Ok, So who is leading the charge? Why isn’t the President doing what needs to be done? The clock is ticking!

I am tired of the corruption and the people with authority to do something stand idly by and do nothing, From my view point, there is no long any law and order in this country. Even the Judges seem to be compromised or corrupt. I fear that if things are not corrected, there will be a civil war, one in which no one can trust who is who. I am so disappointed that so many American willingly participate the stealing of this election. I feel powerless to stop what is going on.

And how are the people suppose to organize from nothing to see justice done when the left control the justice system?

Take over Republican County Committees. This CAN be done by YOU. Not “They”. “They” are going to do nothing! Find your local county committee, join in numbers, vote out the do nothing leadership, make it what you “wish” it was or shut up!

Take over Republican County Committees. This CAN be done by YOU. Not “They”. “They” are going to do nothing! Find your local county committee, join in numbers, vote out the do nothing leadership, make it what you “wish” it was or shut up!

Liked NEWT ….untill I read Susan Bradfords lengthy article about the Italiangate issue that simply put, displays more than “Deep State” issue of complicity by Italy and other countries and ORCHESTRATED through the U.S. Evidently there were MILLIONS of CASH moved years ago to aid Iran and protect the interests of the MILITARY INDUSTRIAL COMPLEX. Had enough? It’ seems to get worse…all the baloney served up by twitter, CBS, MSNBC, CNN ad infinitum is simply window dressing to keep us poor stupid voters from asking too many questions and climbing on the DUMP THE TRUMP buss and proclaim in unison… Read more »