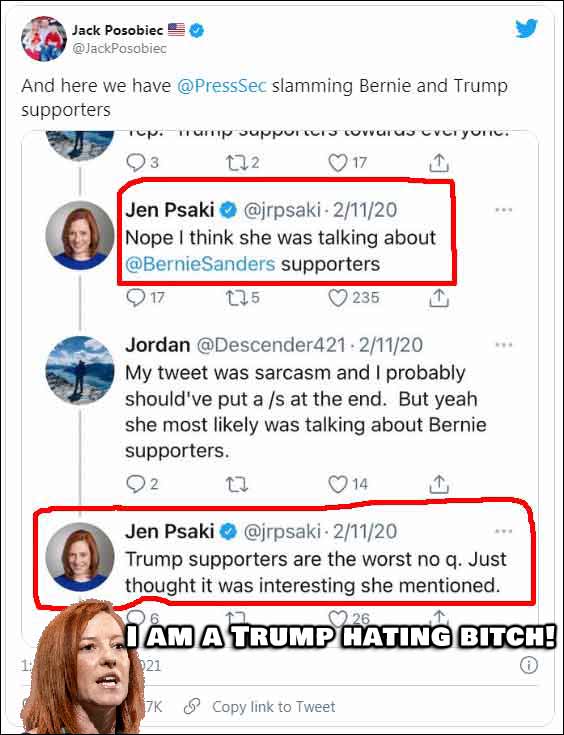 Well, we all knew that Biden’s Press Secretary Jen Psaki was a liberal, socialist, communist bitch that was also a huge Anti-Trumper. She can SAY that she isn’t all she wants but as always, actions speak louder than words. Most of us have tried to watch one of the press conferences with Biden’s press secretary Jen Psaki, but even I have to admit that most are very hard to watch. She has NO CLUE as to what she speaks about. She ‘hems and haws’, she stumbles through notes, only to either be snippy, or tell you that she’ll have to ‘circle back’ on the subject. It’s kind of a joke now with her and saying that she’ll have to “circle back”. She obviously is an idiot, IMO. But she’s also very liberal and has socialistic agendas, just like her boss. She is a Trump Hater, and she has helped push some of the Trump hoaxes in the past, including the Russiagate LIE. She degraded General Michael Flynn, while holding up people on a pedestal like Sally Yates (deputy attorney general under Obama, who was involved with FBI Peter Strzok, remember the emails that surfaced?? And the coordinating lies to take down President Trump?) … Let’s take a look at the Jen Psaki tweets we are referring to.

In this first set of tweets from Jen Psaki on February 11th, 2020 (Remember the status of Covid-19 at that time) addresses the issue that “Elizabeth Warren mentions supporters yelling curses at supporters of other candidates…”, which was stated by Elizabeth Warren, a person named ‘Jordan’ responded sarcastically by saying ‘Yep. Trump supporters towards everyone.” and Psaki tweeted back 2 tweets, the first “Nope I think she was talking about @BernieSanders supporters.” When ‘Jordan tweeted back that he was just being sarcastic, Psaki tweeted back “Trump supporters are the worst no q. Just thought it was interesting she mentioned.“ 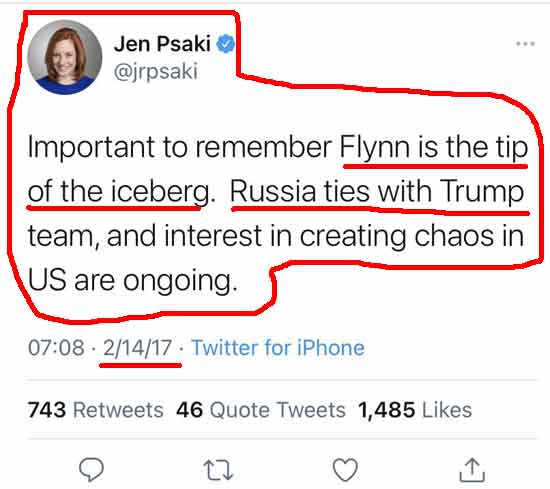 The next tweet we are addressing took place on February 14th, 2017. This was when the whole General Michael Flynn debacle was taking place. Back in December of 2017, General Michael Flynn pleaded guilty to lying to the FBI. he since then withdrew his guilty plea due to new evidence coming into light that proved his innocence. But according to Psaki, with no trial, and no evidence tweets “Important to remember Flynn is the tip of the iceberg. Russia ties with Trump team, and interest in creating chaos in US are ongoing.” This has already been proven as a LIE. Even the Mueller report stated it. But here’s Jen Psaki, pushing LIES and PROPAGANDA.

On May 2nd, also in 2017, Jen Psaki kept up the rhetoric and tweeted “Comey and Russia was a factor. it was not the only factor. Masogyny is real. Underrated-Dems loss of connection with people struggling.” AGAIN and STILL pushing the fake Russia Trump collusion story. Last, but not least is a recent tweet from August 5th, 2020 where she makes reference to ‘Lady G’, who is ‘Lindsey Graham’ and at the same time praises Sally Yates. The tweet reads “only in 2020 can #LadyG get to push a bunch of debunked conspiracy theories while questioning @SallyQYates (aka an American Hero)“. 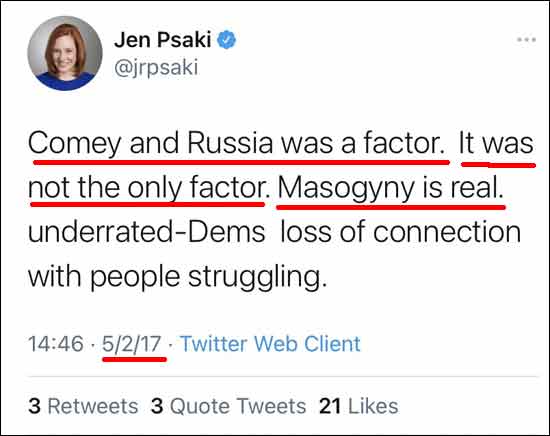 This woman, this Jen Psaki, she sickens me. She should sicken most Americans. Their call for UNITY is bullsh*t. Look at their actions in the past. These communists need to be removed from this country. .. Thoughts? Drop your comments below.

Raggedy Ann is nothing more than an empty-headed doll, spewing misinformation given to her by her puppet masters. What more would you expect from China’s Jao Bi Den regime? At first glance, I thought she was a 12-yr-old put on staff so Jao could SNIFF her!!

I think her “circle back” is her way of not wanting or able to answer because 1. she is either a totally uninformed idiot or, 2. she isn’t sure what Democratic lie she should answer with, as to not contradict any of the other lies that the Democrats have already based their administration on, or 3. she is just a lying idiot .. .three is the charm. Truth usually has only one answer, lies are always inconsistent, convoluted and vague . Why are we letting these people destroy the country?

Why don’t the liberal, NWO, globalist, demoncrats realize that they have sold their souls to the devil and will spend eternity in HELL! That includes psaki.