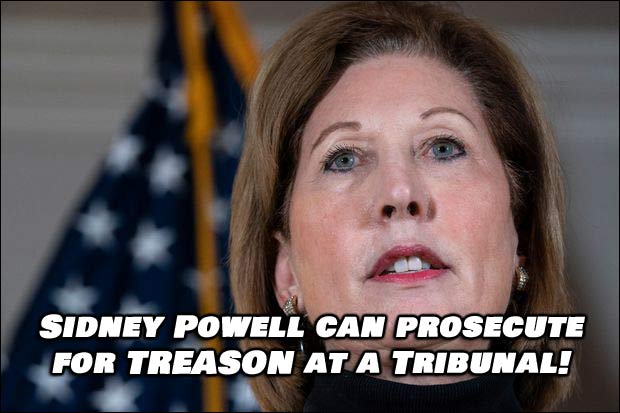 The past few days, there has been a whirlwind of news concerning lawyer Sidney Powell. The rumors pushed by the Left included that she ‘split from the Trump legal team’ and they spun it negatively of course. But the reason for the ‘split’ was quite simple. She represents ‘We, The People’ and she can not, at the same time, also represent President Donald Trump. So they needed to ‘redefine’ her role as an independent lawyer who represents We The People. She is still forging ahead at full force. Attorney Rudy Giuliani and his team are the ones representing Trump. Otherwise the Liberals would have jumped all over the illegalities of her representing both. So, it was just semantics folks and that settles that.

So exactly where does Sidney Powell fit in here? Well, prepare to Thank Her because she represents us all. She represents We, The People. Turns out from what we are being told (The Marshall Report), Sidney Powell is registered as what is referred to as a Military Attorney / Lawyer. This special classification gives her the ability to prosecute Treason at a Tribunal. This is HUGE, now we know why she stated that she was going to ‘blow up’ Georgia first, and referred to the Governor and the Attorney General. Both who stood by and allowed Voter Fraud to be committed right under their noses.

According to LawyerEdu.org, a military lawyer’s job is similar to a civilian lawyer in their day-to-day duties. Representing clientele under jurisdiction of military courts and law is the primary difference (Tribunals!!). The military attorney works exclusively with military law and justice and may be present in both civil and criminal cases.

Im in UK. I can see very clearly what is going on and tryjng to explain. But its the negativity that is pulling people away from the positive I can see from this. Its a fantastic opportunity for the whole of USA to capture all those involved as they are exposing themselves. Great tactics. 5D chess😉

I pray that all the guilty are arrested and prosecuted to the fullest extent of the law.