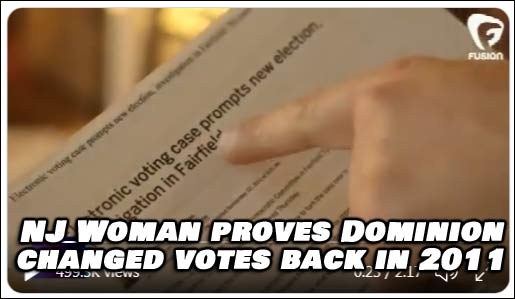 More DOMINION based voter fraud. The video below shows that in her small home town, which happens to use a voting machine based on Dominion Voting Software, the local election results were changed from their original votes.

It happened back in 2011, but it just goes to show that even back then, the Dominion Voting Software (back then aka Sequoia AVC Advantage Direct-Recording Electronic Voting Machine) could NOT be trusted. Cynthia Zirkle and her husband Ernie were running in a local election in their small home town in Fairfield Township NJ. Cynthia personally KNEW the 33 people that told her they voted for her.

She knew there were only going to be about 50 people voting in her small town, so with 33 of the votes already ‘guaranteed’, she had no doubts what the results would be, but that’s not how it turned out.

She lost, 33 – 10. How could this happen? She called and investigated and found out that the voting machine they used, which was by Dominion, had SWITCHED HER VOTES to her opponent. This was enough to prompt a New Election!

“You don’t actually have to be a computer expert to hack a voting machine.” … (Article Source)

VIDEO : WATCH and see how easy it is!

Opinions?? .. Drop your comments below.