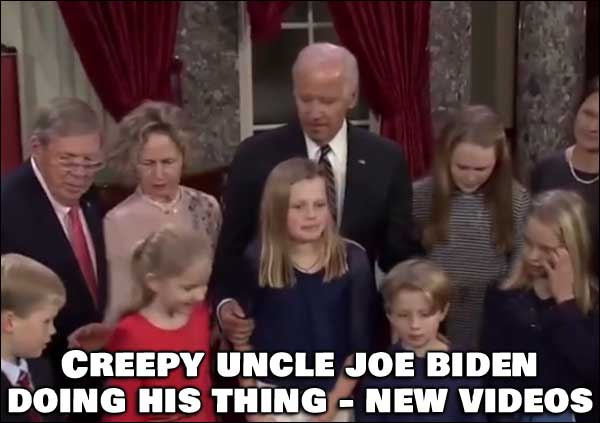 And I though the first few rounds of pictures and images of ‘creepy’ Uncle Joe Biden being way too touchy, grabby with young girls was bad, but these new video clips (video found below) I have never seen and they are just as bad as the ones you’ve seen before. I can’t see how anyone that really knows this man would allow his/her young daughter(s) around Joe Biden. The below video is not long, only about 2 minutes, but I’m telling you that it’s going to piss you off, so be prepared.

Notice a few things. First, at one point, there’s a series of clips where you see and hear Biden pretty much demand that the woman / female come stand next to him on his left. Always on his left. Over and over he does it and in most of the cases, he follows with a hand grab around their waist / lower back, pulling them in tight. Also note that you’ll hear also towards the end where Biden is in different locations and environments, but uses the same story over and over when he meets a young girl. He tells what he usually thinks is one of her brothers something close to “My dad used to say ‘You have one job. Keep the guys away from your sister‘.”. You’ll notice he says this in all sorts of different situations, to different people. I don’t know why, but I find that strange. He definitely has some fascination with young girls, it’s obvious to any who watches all the videos of Biden interacting with them, and I’m sure those around him see it too, they just keep their mouths shut. .. Video (found below) is credited to Charlie Kirk.

Thoughts?? Feel free to drop your comments below.