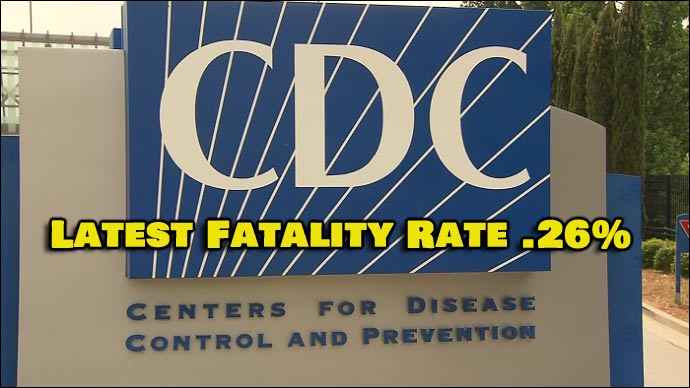 Well those numbers dropped real fast. Originally I think it was Dr. Fauci that guesstimated the fatality rate of 2%, and the WHO (World Health Organization) stated it was more like 3.4 percent. After both the Doctor and WHO stated those numbers on national television (and streamed live on every device and browser), even President Trump was doubtful about those numbers, he stated “Well, I think the 3.4 percent is really a false number. Now, and this is just my hunch, and — but based on a lot of conversations with a lot of people that do this. Because a lot of people will have this and it’s very mild. They’ll get better very rapidly. They don’t even see a doctor. They don’t even call a doctor. I think that that number is very high. I think the number, personally, I would say the number is way under 1 percent.”. This was said on Hannity and can easily be fact-checked. Since then, multiple studies have returned lower numbers than previously stated by both Dr Fauci and the WHO.

If people did not believe those results, then hold onto your hats because the CDC just released updated fatality rates among symptomatic patients. So looky here, President Trump was RIGHT. The number IS below 1%, in fact, it’s more like .26 percent (according to the CDC themselves for both symptomatic and asymptomatic). This is the information they just released :

And get this, according to the CDC’s present numbers and calculations, the case fatality rate of the coronavirus is .4 (zero point four) percent. However, that number just among symptomatic cases, which, the CDC estimates, is 65 percent of all cases. This means the CDC estimates that the fatality rate for all infections across all age groups, symptomatic as well as asymptomatic, is approximately .26 percent (zero point two six). …. Pissed off that you were lied to?? .. COMMENT BELOW

Registered Nurse who was certified in Infection Control here. I saw the data being used and how they were coming up with their predictions. Statistics has a saying……GIGO! Garbage In, Garbage Out! Anyone can skew data to make it come out how they want it to. Could see this coming a mile away! And when you have the statisticians working with the liberal MSM, the sheep were ripe to be herded. Fear is a great motivator and they used that and the general public’s natural tendency to do the right thing. I do believe this was all done to ruin… Read more »