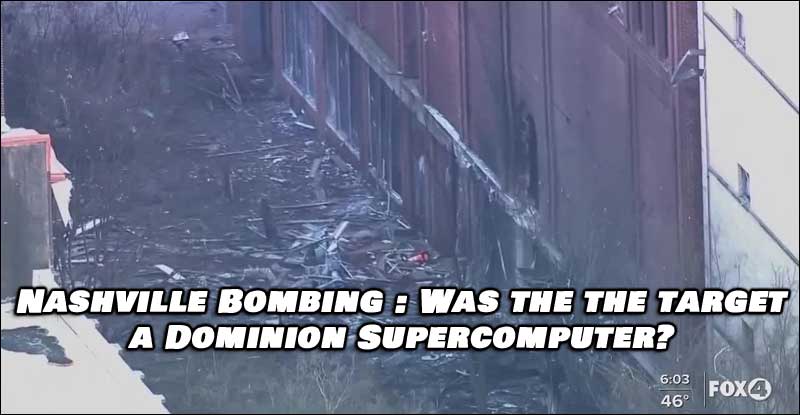 Something just doesn’t seem right about the bombing / explosion in Nashville the other day. A lot of facts are just not adding up. Why, for instance, was there a pre-recorded message playing through loud speakers from the explosive filled RV? Why were the bombers warning the public to stay away and that an explosion was imminent? Did they want to destroy something, but keep human casualties to a minimum? .. That’s does not sound like your everyday average terrorist attack …. Unless the people were not your target.

Let’s look at the location of the explosion. It happened on the street where and RV was parked in front of the address 166 Second Avenue N. AT&T has a data processing center right near there, along with other communication infrastructure. According to research, it was not long ago that AT&T won the rights, through a bidding contract, to “conduct a forensic audit of the Dominion voting machines.”. These machines to be audited were supposedly brought to Nashville, into a computer room that housed multiple ‘supercomputers‘. These supercomputers would then, at a much higher rate than a human can, begin to ‘audit’ the machines. So the supercomputers would have the ability to communicate with one another, they were all hooked up to the AT&T intranet system in Nashville. However the explosion wrecked communication abilities which caused widespread Internet disconnects, and also destroyed what is know as the Cumberland River Cooling System, which then caused the machines to seize due to the intense heat. Were the super computers all completely destroyed due to the massive explosion, that is still left to be seen as investigators sift through the remaining rubble.

There is another connection that needs to be looked at too, and that is William Kennard who sits on the AT&T Board of Directors. Kennard is also a director board member of Cerberus Capital Management. Cerberus is managed by executives at Staple Street Capital and the same Mr William Kennard. Therefore, the voting rights of Dominion belong to Cerberus Capital Management. To tie that all together, here comes the fact that William Kennard was also the FCC chairman of Bill Clinton and Obama’s ambassador to the European Union. … WOWZERS! What a coincidence!! (wink, wink)

Just before the explosion in Nashville on Christmas morning, some witnesses said they first heard gunshots, then the pre-recorded warning message played, which warned all within hearing range to evacuate the area due to an imminent explosion. What made this all even stranger was the way the mayor of Nashville handled the event in an interview (see link), where he seemed to laugh and smirk. All appearances seem to point to an event that was NOT made to harm people, but to do physical damage to a specific area. Exactly WHY, we do not know yet ….

What are your thoughts? Please let us know in the comments below.

I can believe this. We American’s need to badly Drain This Swamp

According to research? But, the source of this mysterious research isn’t cited. Are there any leads?

Yea, it’s all a theory until a bomb goes off.

Bidens win is just a theory until the evidence to support it is untainted.

This actually sounds probable to me. I literally watched dozens of hours of hearings to form my own opinion. If info was heard by public or anyone kept an open mind, it is so shockingly true that huge fraud was planned and executed. I don’t know what should be done with this truth. We want peace, but I know going along with a lie may be too dangerous. We don’t want violence, but I think trusting in just truth and where it leads is only safe answer. The truth shall set you free. We might want to let it go,… Read more »

His father worked for Bell South until his death in 2011. Bell was taken over by AT&T. I do think they are right on about the dominion server and COB connection

Is this FACT? It’s being fact-checked on FB

The location of those servers and supercomputers should have been top secret and protected by armed guards 24/7. How incompetent to have people with deep connections to the far Left involved in any way since they are the ones trying to steal this election. Perhaps a military base would have been a safer place to put them. Let’s hope enough data can be salvaged. Either way it goes to prove the Left and the globalists will do ANYTHING to cover up their election fraud and their attempts to control our country for power and greed.

When the Deep State FBI is involved, NOTHING is secure.

Didn’t hurt anybody? How about the people who had to leave their homes on Christmas morning only to see them damaged from the bomb? How about 74 million Americans who voted for Trump only to be disenfranchised by all the fraud in this election? How about all the jobs that will go back to China if, God forbid, Biden would get into office? Not to mention the rights of Christians and Jews to worship in their respective places of worship, the rights of children to go to school, the rights of people to see their relatives and friends whether at… Read more »

The Question is: did the supercomputers capture all the data before this explosion? Was the data transferred in time? THAT IS THE QUESTION…………..I guess we will know soon enough

equally important, ask what transfers to foreign connection were made……………

This is now a seditious movement by Democrat operatives !

Although MOSTLY TRUE to the Socilaist Agenda to DO WHAT EVER IT TAKES to secure an Election Fraud “victory”, So HOW MANY Super Computers does it take to audit fraudulent voting machines in America ???
I’m sure my Low End LAPTOP could have done it in a day ….

“According to research, it was not long ago that AT&T won the rights, through a bidding contract, to “conduct a forensic audit of the Dominion voting machines.”

What research? Where is the link?

There is a lot of dynamite information in here,with zero sources. We;’ve learned to hold our judgement until we can judge for ourselves the authenticity and veracity of the source.

Unproven until proven, is what I say

This has been totally buried by the “msm”.
For sure it was to stop the investigation.