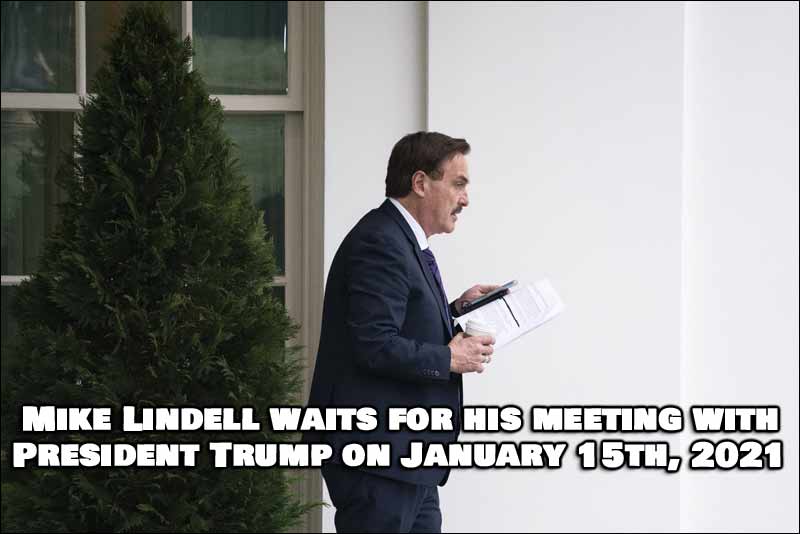 On January 15th, 2021, the CEO of MyPillow, Mike Lindell, showed up for his meeting with President Trump with a cup of coffee in one hand, and paperwork / phone in another. As he waited to eventually be let into the West Wing, Lindell paced, checked his phone, and sat while he went over his personal notes. Mike Lindell has been a staunch supporter of President Trump for as long as I can remember. He’s appeared at Trump rallies and speeches, and has dedicated a lot of time (and money) to the Trump campaign. President Trump obviously takes the words of Lindell to heart, since he obvious has faith in them.

Today’s meeting was slightly different though, as Lindell waited to be let in for his meeting, a photographer caught a few photos of him. One of the photos (see below) obviously used a very high zoom lens, and the picture caught a nice large piece of one of the pages of notes that the MyPillow CEO had. Now remember, we are 5 days away from Biden’s Inauguration. On this sheet of notes of Mike Lindell’s is written some very ‘big’ words and phrases such as ‘Insurrection Act’ , ‘Martial Law’ , ‘Sidney Powell’ and more. What could this mean? … Well, we for sure are NOT going to speculate. You be the judge … Feel free to comment below. 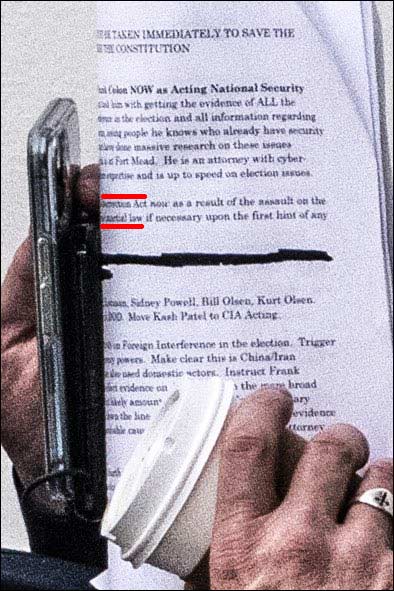 It is time to turn this thing around , people are feeling hopeless , and waiting as patiently as they can, i am very concerned for the people who are giving up life and taking their children with them.

It appears the Top comments are relating to riots,etc. What I found interesting is the voter interference information in the last paragraph. Trump has got to do something or this country we love will fall. I’m praying for the 19th. Arrests, indictments, a complete Purging!

If Trump supporters think the My Pillow guy is gonna help Humpty take over the country, they are gonna be surprised on the 20th.

If you think we do. Then you are a bigger idiot than I gave you credit for! LMAO!

The Great Awakening is coming!

Interesting that you are following him then…be afraid!

Pray this is real ,so much fakenews, propaganda, Our Democracy and freedoms are lost forever is President Trump doesn’t enact soon.

I hope this is true.

Not buying this photo.