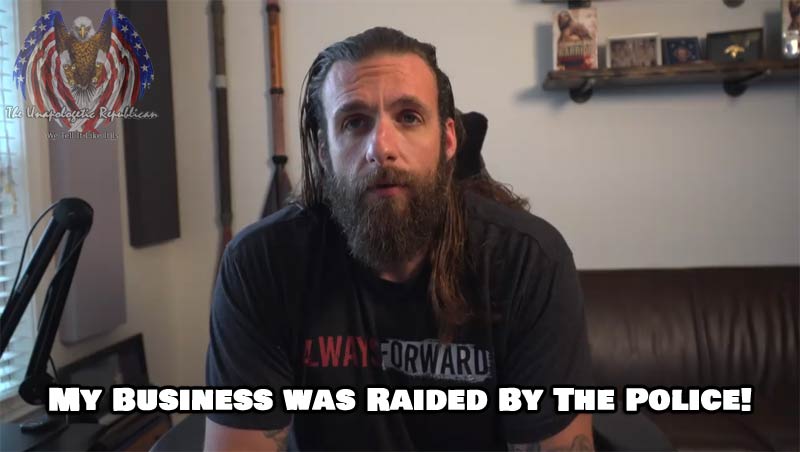 My Business Was Raided By The Police – by Nick Koumalatsos

Business owner Nick Koumalatsos, who owns Agoge Training (online exercise coaching) and Snap Fitness Holly Ridge was visited by North Carolina authorities at his gym’s physical location because they say he was in violation of the governor’s orders. A back-and-forth happened, yet the liberal Governor obviously did not care about the average man and small businesses, and basically made restrictions so tight that the business owner now needs to shut his business. Things like this are happening across the country, especially in states run by liberal governors. Here’s the post from Nick Koumalatsos about what happened and what he’s doing about it. He could use your help too. Watch & Read :

My Business Was Raided By The Police:

It is with a very heavy heart that I inform you that we are temporally closing to the public until further notice. I have very strong convictions about our rights in America and have no problem fighting for them. I served 12 years in our Armed Forces where I took an oath to defend our constitution. What I cannot sit back, and watch is the harassment of our members by the Holly Ridge Police Department. This is simply inexcusable and on their behalf, I apologize for any negative interaction or empty threats you may have received.

Due to unfortunate events Police Chief Keith Whaley has been released of duty and Captain Richards is acting Police Chief of Holly Ridge. Captain Richards has unlawfully trespassed in our gym with an old keycard which was to be returned upon termination of membership prior to 2018. He entered the gym and threatened to ticket all members that were inside. He also took videos and photos from the windows. I want to inform you of this so that you are completely aware of the situation.

I have personally spoken to the Mayor Jeff Wenzel sad he stands by Governor Roy Coopers orders. “Regardless of how many rights it violates.”

Currently ABC Stores, Tobacco Shops, and many other big businesses are allowed to operate under the essential clause however, small businesses are deemed non-essential. This is a clear picture of favoritism to businesses that have high sales tax rate for the state of North Carolina. Due to the way memberships and personal training are taxed it is not a large revenue generation machine for the state. Federal judges ruled last week that Governor Roy Cooper’s orders violated the Constitutional First Amendment Rights for freedom of religion and to worship freely. Churches are meeting all over North Carolina at this time.

Whether you agree with this order or not is not the point. The point is all Americans have the rights afforded to them by our Constitution. If you choose not to exercise those rights are up to all of us on an individual basis but those that choose to do so, can without prejudice from our Government.

We are a keycard access membership only health facility with a Physical Therapy Tech on our team. Many of our members utilize our facility to maintain their physical health and even more importantly their mental health. Physical Fitness is a cornerstone to mental and physical health and that is now more important than it has ever been especially in our small military and veteran community.

These are the actions that I will personally be taking, and I suggest/hope you do the same:
As I said I have contacted the Mayor Jeff Wenzel and he is not willing to assist on any level. He prefers that Holly Ridge Business Owners silently standby as their constitutional rights and freedoms are ripped away and watch their businesses fail as the unconstitutional orders are extended with no end in sight.

We have done everything that the CDC recommends practicing safe and healthy guidelines while dealing with COVID-19. Extra pre-cautionary measures have been taken: sanitization, keeping capacity at a 10 member minimum etc. Their guidelines are simply not enough to allow us to continue to serve you. So, I will be contacting The Town Council in regard to Captain Richard’s actions as well as this unconstitutional executive order. Quarantine and Isolation orders by definition are put in place to protect the healthy from the sick. Never in the history of our nation have we chosen to quarantine the healthy.

Here is their contact info for those of you that would like your 1st Amendment rights to be heard. I strongly suggest you do so.

VIDEO : My Business Was Raided By The Police – by Nick Koumalatsos