My 2nd trip to Madison Wisconsin after violence erupted. Watch 20+ minutes of video!

My 2nd trip to Madison Wisconsin after violence erupted. Watch 20+ minutes of video! 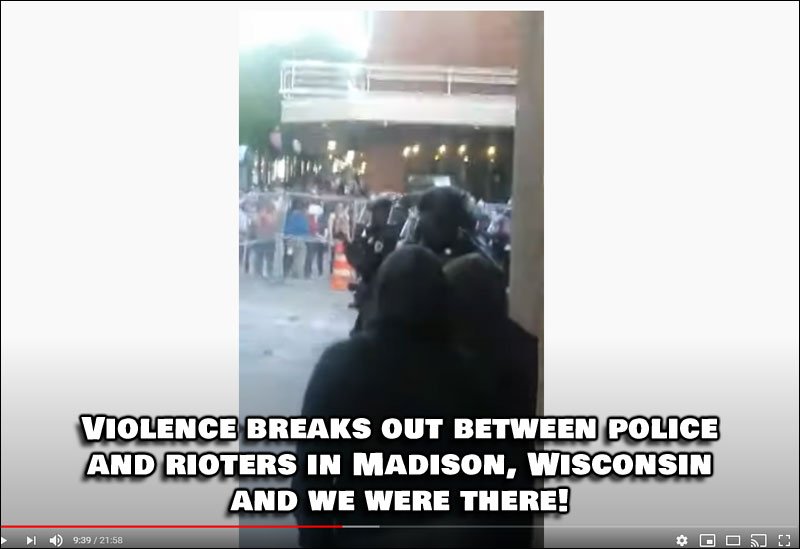 My second trip to Madison Wisconsin today. This is when the sh*t hit the fan between protesters/rioters and police. Watch the video below.

Time to pick up from where I left off in my last article. I had left the capital and returned home. I was pretty surprised at how peaceful the protest was. I was actually quite impressed at least in that aspect, thinking maybe things were going to be different here (Madison, WI) when compared to Minneapolis. My wife was back from work and wanted to celebrate her first week back with Red Lobster. Not a bad idea, I thought. For the price, the shrimp is decent, though the biscuits there are the real star. There was some discussion between us on Red Lobster Biscuits vs. Texas Roadhouse dinner rolls. Never mind that though, lets fast forward to the ride home.

I pull up on my phone a live stream at the capitol, shocked to see tear gas being blasted as people were rioting in the street. I was nervous to ask my wife to go, being our son was in the car with us, but she pitched the idea. I said ‘step on it’, I want to get some footage for the website and for Facebook. I began to shake a bit as we were about 3 minutes away from the ‘main scene’. I try to live life with the philosophy that I only fear God. I think it is the mindset any Christian should have. I don’t know if fear is the right word, but I was nervous as f#*k.

I knew where the police officers were because the news stated it, and although some streets were blocked off, we were able to navigate there. My wife dropped me off and I said go post up, have your phone on loud, and be ready to come get me. As I walked up the slight incline to the scene, it all hit me. I guess you could say I am a bit of a thrill seeker. When I go out to New Jersey I like to swim out deep in the ocean even deeper than the surfers go. But knowing at any second this could turn bloody was a different kind of thrill. It was an eerie and surreal experience I can hardly put into words.

People were throwing things and the cops were literally standing there taking it. I can not tell you how proud I was of the police to stand there and not immediately strike their blow. People were trying to fence the police in and if they got too close police would spray them with what looked to be a canister of pepper spray about the size of a fire extinguisher. At one point while filming they sprayed it in my direction but I took off running to avoid it. A girl who was just a mere couple feet behind me took it straight in the eyes.

I filmed diligently as people soaked her with milk (milk relieves the burning). By this point people were pushing garbage bins from nearby apartment complexes out towards their makeshift fence. I’m not sure what the end goal was but I saw the little antifa weasels plotting something. The restraint shown by the cops remained top notch through it all. The insults people were hurling at them made my stomach turn. I wanted so badly to stand up and tell them all to leave the cops alone, but then I would’ve not only had to worry about getting in the crossfire from police, I probably would have been swarmed by antifa as well.

I remember at one point three cops walked passed me to get more supplies from a police car, and you could tell they meant business. To see 10 or so police standing up to hundreds of thugs was amazing. I am so proud of these brave men and I could not be more impressed with what I saw. I’m not sure what else will happen tonight but I pray for their safety. As I sit here grateful I’m back home and get to watch my son play with his toys, I can only hope those officers get to do the same. I do plan on thanking them all tomorrow, some how some way, and letting them know how proud I am of them. If I was in there shoes I don’t know if I could have used that same restraint. I hope the National Guard can come in and help if need be, and I hope at some point they teach these thugs a lesson. Once the protest becomes destructive, it will not be tolerated. In the great words of Donald J Trump “Once the looting starts, the shooting starts.” … Watch the video below … And we’d love to hear your comments, so please COMMENT BELOW.