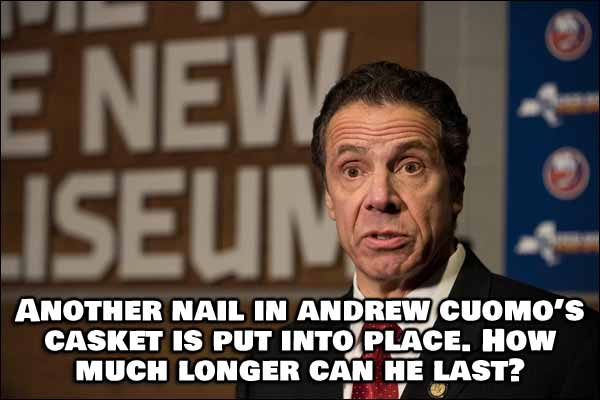 As if Cuomo wasn’t in enough hot water as it is. … It’s already been released that he purposely hid covid death counts that were connected with his Nursing Home Covid Scandal. But the news just keeps getting worse for him, and rightfully so. I personally hope he is removed from office and brought up on multiple charges, along with being civilly responsible for all those unnecessary deaths. Now we find out that in late May of 2020, Michael Caputo, who was an HHS Official (Department of Health and Human Services) at the time and part of his position was to track nursing home deaths, had an issue with the way Cuomo was handling things. Caputo ended up criticizing the way Governor Cuomo was handling the situation, putting the nursing home deaths on Cuomo’s shoulders, where the responsibility should be. Cuomo went ballistic. During a recent interview with OANN (One America News Network) Michael Caputo described how a furious Andrew Cuomo dropped everything to fly to DC, where he ‘told‘ President Trump to ‘fire‘ Michael Caputo from his position. Trump REFUSED.

It turns out, Cuomo should have just waited. In September 2020, after making ‘questionable’ allegations in which he ‘allegedly’ falsely accused government scientists of engaging in “sedition”, Michael Caputo announced that he was taking a 60 day leave of absence. The reasoning he gave was “to focus on his health and the well-being of his family”. He called it a ‘medical leave’ and would be addressing “a lymphatic issue discovered last week”. Caputo never came back to his position, but is back in the spotlight again since releasing this news about Cuomo flying to DC to try to get President Trump to fire him. … So, what are your thoughts? Cuomo did enough damage and needs to be held accountable, but this new story concerning Michael Caputo is quite damaging to Cuomo. It shows the typical Left mentality; if someone disagrees with you, remove them from the picture. Feel free to drop your comments below.