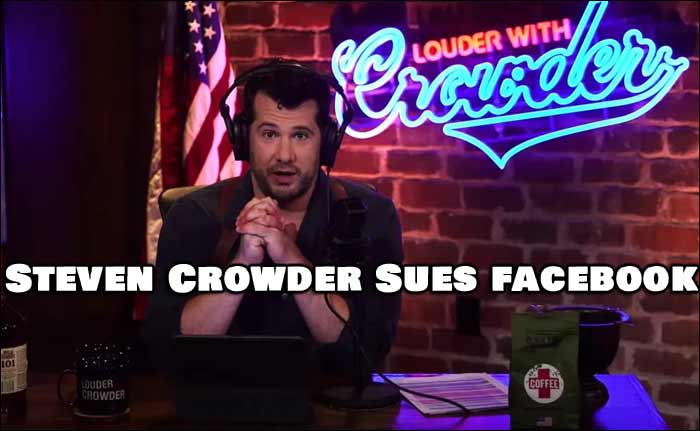 When it rains, it pours. Here comes another lawsuit against the social networking giant Facebook. No, not the Candace Owens lawsuit. This one is being ‘sponsored’ by Steven Crowder of the show Louder With Crowder. The lawsuit allegations are quite staggering and include committing ‘unfair competition, fraud, false advertising, and antitrust‘ violations along with other censorship-like offenses.

Bill Richmond, who is the attorney for Steven Crowder, spoke with Crowder during Monday’s show and he gave some insight into the lawsuit. He’s actually part of the show, the other members tease him as the ‘half-Asian lawyer’ of Steven Crowder, but with this upcoming case, it’s doubtful that he will continue to be a regular until he has more free time. When interviewed and asked about his lawsuits comparison to others against Facebook, he replied “This time’s different. The reason why it’s different is because we’re going after Facebook based on its own words and its own premises.” He makes reference to ex-employees of Facebook that have come forward with admissions that the company 100% does in fact suppress positive conservative news. A report that was published back in 2016 by Gizmodo alleged this by a former employee, thus forcing Congress to question Facebook about their practices. Bill Richmond went on “They told Congress ‘we don’t do it,’ they told the consumers ‘we don’t do it,’ they told us that they don’t do it. But over the course of years, we’ve realized they actually are doing it.“

Crowder’s lawyer went even further, he stated that the lawsuit is (what he referred to as) ‘pro-business and anti-fraud‘. He explained “You can run a business however you want — if you were a social media platform or any kind of business and you wanted to allow certain types of content or certain types of customers in your store or on your platform, you’re allowed to do it — but what you can’t do is lie. What you can’t do is say, ‘We are open to everyone, we don’t discriminate based on political ideology or race or religion,’ and then turn around and actually do that, both expressly and through the software that you’re implementing.“

The lawsuit is asking for ‘injunction relief’ from Facebook. What does that mean? It would result in an actual order from the court demanding Facebook to “stop censoring conservative content and content from conservative sources.” Richmond is prepared for a lot of ‘disappointment’ from lower courts, and is hoping to take this all the way to the Supreme Court of The United States. … As of the Louder With Crowder show announcing this, we are waiting for copies of actual court documents. … Thoughts? Feel free to drop your comments below. … **Read How To Join An Existing Class Action Lawsuit Against Facebook, Dominion & Others – Click Here**

How do I join the suit?!😡(I’d like nothing better than to put Zuckerberg & Dorsey BOTH in homeless shelters!)

I want to join this lawsuit! I’m sick of being suspended for Free Speech!

Way to go. It’s about time people with a conservative platform do something about this I would love to see Facebook and Twitter both go under.

I want to join the lawsuit. Facebook banned me for posting video footage of voter fraud in Detroit Michigan!