To the dismay of many sports fans in the state of Michigan, who are extremely eager for things to return to normal after the coronavirus shutdown, some disheartening news was released by Governor Gretchen Whitmer on Tuesday May 14th, 2020.

Whitmer said in an interview with Detroit radio station WKQI-FM that life is going to be different, referring to the state’s eventual emergence from her virus-response order.

“We’re not going to be filling stadiums in the fall,” she said. The governor explained they have to manage the people’s expectations about crowd capacity at the events in the coming months.

When asked to elaborate the governor’s comments, deputy press secretary Bobby Leddy indicated in an email Wednesday that stadiums full of fans might not return until a vaccine is available, Detroit Free Press reported.

In the same statement, Whitmer said, “Medical experts have made it clear that COVID-19 spreads when people are in close contact with one another, and without a vaccine, our best strategy in combating the virus is to practice social distancing.”

She assured they will continue to make informed decisions with data and medical expertise with regards to the stadiums. Whitmer added that even though she wanted to give people confidence their plans will be met on certain days, COVID-19 was a novel virus, and the authorities were dealing with it for the first time. She added her administration is still learning tremendously about the disease on how to combat it and keep people safe to avoid a second wave of infection, Free Press reported.

Although the news does not look good for National Football League’s (NFL) Detroit Lions and other teams, they are prepared to make adjustments should the season be shortened, or crowd capacity in stadiums are limited to practice social distancing. 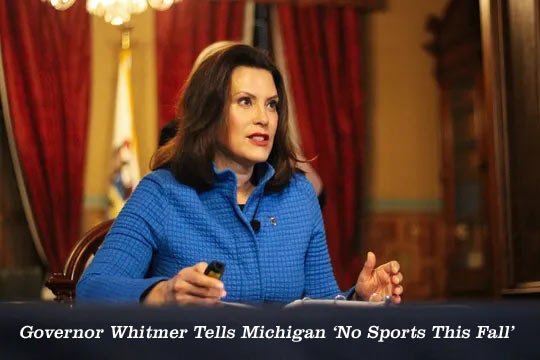 Michigan Governor Gretchen Whitmer says that due to the chinese coronavirus, the state will not be able to fill stadiums for any events in the fall.

Whitmer’s statement came a few days after the NFL released its 2020 schedule. According to the schedule, all the teams will play a regular slate of four preseason games and 16 regular season games that will be spread over 17 weeks.

“The Detroit Lions are following the NFL’s lead in preparing to play a full 2020 season in front of fans,” the team told the Free Press.

They said that given the circumstances, contingencies must be put in place to ensure everybody’s safety.

Michigan has been among the states hardest-hit by COVID-19. As of Wednesday, Michigan ranked number four in COVID-19-related deaths, with more than 4,600.

Whitmer recently extended her lockdown orders until May 28, but state Republicans are suing the governor claiming she extended the order improperly without the involvement of the Legislature. Oral arguments will begin Friday, Detroit News reported.

I was just put in Facebook jail for a meme of hitler saying” if you turned your neighbor or local business in, you did the rich thing” . How fascist is that? There would be no problem if it implied or outright stated that Trump was a nazi.