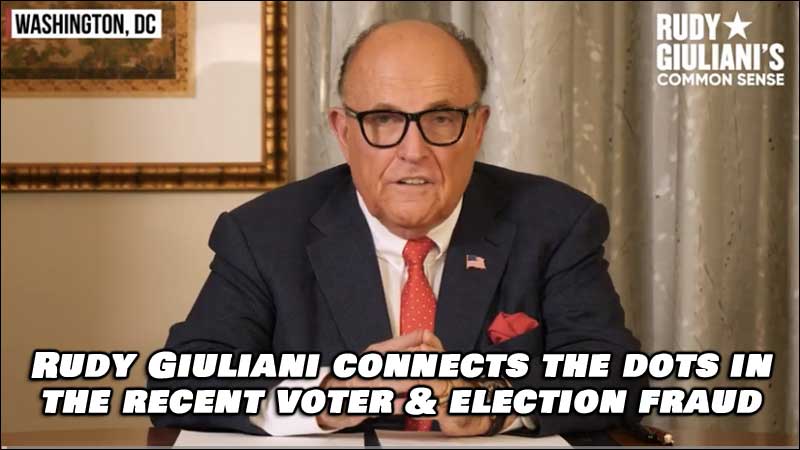 On the November 27th (2020) version of Rudy Giuliani’s Common Sense show, he continued to drop bombshells directly related to the most recent voter fraud & election fraud that took place in the United States 2020 Presidential Elections. Anyone with a pinch of logic and an open mind will listen to this (and all the other things Giuliani has recently said and shown) and be able to see the massive voter fraud that took place. You can watch the video below, plus we transcribed the entire show section for you to read too. The election fraud was so massive, this will go down in history as one of the biggest travesties of justice this country has ever seen.

” When you look at the similarity of the fraud in the 8 (eight) districts in which we’ve brought, (you see) the similar pattern, the similar hiding, the similar of putting Republicans in corrals and all, you see this is part of an overall plan or scheme. This wasn’t developed all on their own spontaneously by eight or nine leaders of the Democrat Party as the best way to count ballots. Putting them in a machine and taking them away and then tallying them overseas is not the right way.

So these are the facts that we’re proposing to prove. We’re going to hope to get into one lawsuit and .. we believe that they can be proved rather quickly because they’re very, very close to self evident in many cases.

You see the spike in the vote. You see the change in position of the two candidates just about the time the votes are being dumped in.

There was no foreign policy. Different people should be running for these offices possibly, than the people in the past. People with expertise in these areas should be allowed into the army and the Air Force. It’s the only way in which you’re going to assure this is done right.

And really, given the corruption that set in in the Democrat Party, it’s time for a special prosecutor and a special investigation of mail fraud; in elections because it is a nightmare of every candidate that they win the election, but it gets taken away from them online because somebody else is more unscrupulous or better at using the Internet or better at spotting things than they are.

The person who elected to office should be the person who is best for the office, not best on knowing how to cheat. And this has been too much the situation in Boston and New York and Chicago and Detroit and all these cities that have seen themselves in the in the cross-hair of this allegation.

So I ask you to pay really close attention to all of these episodes that really tie together a picture and when the evidence is out, I’ll be able to concentrate on the evidence even more and show you how it all ties together so that if you were on, that jury would convict. “

… Check out the video below to hear Rudy Giuliani say all this himself. … Also, if you have any opinions, please feel free to comment below.

“The similarities of fraud across all eight regions, if you connect them together, form a puzzle”