List of rioted cities, and their political affiliation. Wait until you see these stats.

List of cities where riots, looting & violence were reported, their mayors, governors and their political affiliation. 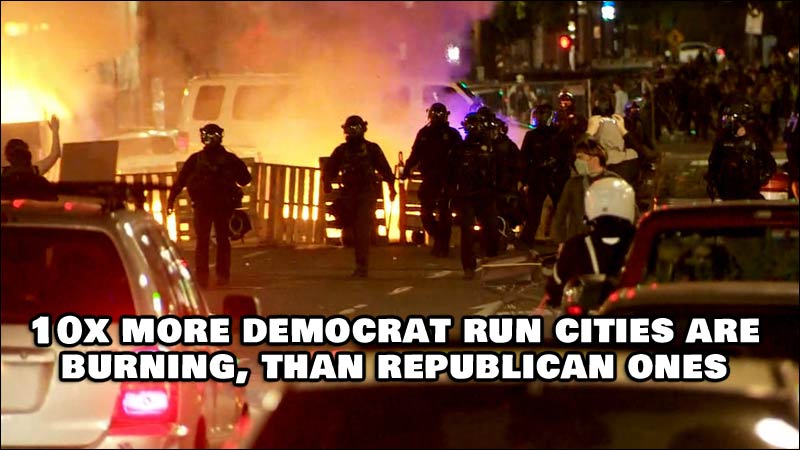 Which cites are burning, and what political party runs them? Check out the list below.

I’m just here to state some facts. I am not getting into the whole debate about racism, George Floyd, or anything other than the cities the violent riots and looting are taking place in. We’ve all watched the videos of rioters looting, smashing windows, burning buildings, assaulting police, assaulting private individuals and a whole slew of other horrendous things. I do have some questions though; In many of these cities, the police are being told to ‘stand down’; WHY? .. In some cities, the mayors are even encouraging the riots. WHY? .. Why have some cities called in the nation Guard, but have NOT given them the GO signal? Why are locals in each rioted city telling us that most of the people doing the damage are out-of-towners? Where are they coming from? Who’s bringing them in? Are they being paid? … Lot’s of unanswered questions here folks. Feel free to comment below.

Under this you will find a list that I put together this morning. I am sure that I must have missed plenty, and you can bring that to my attention in the comments below, and I will edit/add/remove any facts that I am newly aware to. The list is in no particular order. The list contains the cities in which violent rioting, looting and assaulting are taking place. Next to each city, state listed, is the Mayor of that city and their political affiliation. Then the Governor of the state, and their political affiliation. I am NOT making any presumptions or statements other than the facts. You take this information as you want, and do whatever you like with it.

The list (as of writing this) contains 29 cities; of which 26 have Democrat Mayors and 3 have Republican Mayors. The # of states may look skewed because some states are listed more than once (depends on the city the violence is happening), but there’s no doubt that even the Democratic run states out number Republican ones. Check out the list below, and don’t forget to Comment.

One last note, US Embassies overseas are also being attacked : US Embassies in London (Mayor Sadiq Khan), Dublin and Berlin (Mayor Michael Müller and Chancellor Angela Merkel). … Don’t forget to COMMENT BELOW

You need to update with Kenosha by now.

Now go a little deeper and research throughout history over the past 20-50 years when the nation’s cities & states had flip flopped control yet still had issues. upheaval and historic riots under the control of the opposite party. Otherwise, this is just a list that more basic than true to reality.

You forgot Gov. Kate Brown of Portland OR!

If everyone would think of how insane things are and why the leaders are actually encouraging riots and homeless people to fill city streets and a government that just opens the doors at the border allowing 180,000 people to freely enter into a super power nation each month. The whole world is in chaos. It could be that the anti-christ has entered the world.

Yep, could be Antichrist (Pope Francis?) has entered the World, AND NWO (New World Order) and the UN AGENDA PLANS (Blueprint to Destroy America) is taking place at High Speed. Soon the World to be under China Communist Control. Almost there.

I would RESEARCH Texas Counties. But do NOT bring your Democrat or Liberal ways ‘if’ you have any, for these people will NOT stand for it.