Lindsey Graham Has Questions For Pelosi About Capitol Riot

Senator Lindsey Graham Has Questions For Pelosi About Capitol Riot 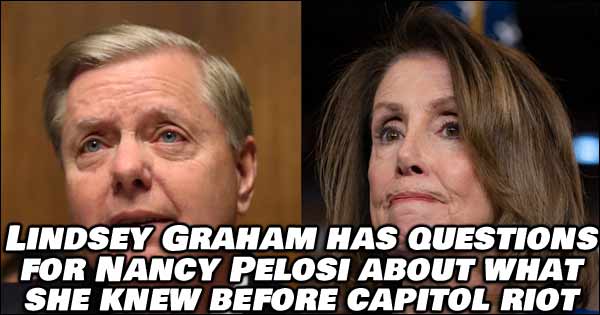 Senator Lindsey Graham Has Questions For Pelosi About Capitol Riot

Now that the sham impeachment 2.0 is over, some of us can take a closer look at the events, and the timeline that they unfolded through. Of course the Left is STILL looking for a way to hold President Trump responsible and accountable for the ‘violence’ and everything else that took place, it appears they may be planning to use the 14th amendment to keep Trump from ever running for office again. Within the 14th amendment, there is text that has been used in the past to ‘prohibit former civil and military office holders’ who had ‘supported the Confederacy’ from again holding any state or federal office. There’s also talk about holding Trump responsible in both a criminal court and a civil court (Source links at bottom). But here comes Senator Lindsey Graham with some from strong questions about the ‘riot’, especially now that additional facts have come to light; Trump’s defense team brought some very strong and disturbing evidence with them at ‘impeachment 2.0’ and are convinced the ‘incident’ on January 6th was ‘pre-planned’. I’m convinced too, and so are a lot of people.

Senator Lindsey Graham did not hold back. During an interview with Sean Hannity of Fox News, Graham brought up some great points and questions. Questions that need to be answered. He stated that if the events that unfolded on January 6th at the Capitol were pre-planned, “as emerging evidence shows it was“, then logically there was ZERO incitement by President Trump. The ‘actions’ were already planned, so there was nothing for Trump to incite; it was ALREADY incited by the people who planned it. Graham continued “The FBI and the Capitol Hill police actually now understand this was pre-planned. They were planting bombs the night before. So the whole story line that Donald Trump caused this by the speech has fallen apart due to good law enforcement activity.“

Graham continued further, “And here’s what I want to know: What did Nancy Pelosi know and when did she know it? If it was widely known by the FBI and the Capitol Hill police that people were planning to come to Washington before the 6th, to create violence, I want to know, did she know about that? The whole story line originally was Trump created this from the (Jan. 6) speech. Now we know that people had this on their mind before he ever spoke, so they are playing this bizarre game of trying to get Trump in on it before January 6. This is why you don’t want snap impeachments. Evidence really does matter.“

The next morning, the MSM calculatingly used only clips of Grahams’ conversation, and tried to paint him as spewing ‘deeply offensive’ rhetoric. Joe Scarborough even went as far to say that Graham and the other Republicans were “willing to forgive a terrorist attack against the United States Capital.” .. But of course they took Grahams speech and edited it to make him look and sound bad. His entire statement he summarized the interview with Hannity with went, and I quote (It’s LONG), “I think most Republicans found the presentation by the House managers offensive and absurd. We all know what happened at the Capitol was terrible. I hope everybody involved that broke in the Capitol goes to jail. But I don’t remember any of these House managers saying a damn thing when they were trying to break into my house and going after Susan Collins and spitting on all of us. If this is a problem for a politician to give the speech that President Trump did, well, then Kamala Harris has a real problem because she actively engaged in bailing out rioters. And here’s what I would suggest. If you are a politician trying to raise bail for people accused of rioting, you are inciting more riots. But here’s something that nobody has talked about that’s important. If there is — if there’s pre-planning, there’s no incitement… … People said I didn’t pay attention today. They’re wrong. The managers have got this cockamamie idea, absurd theory, that Donald Trump was monitoring the Proud Boys’ website and other far right websites, and that he and Dan Scavino knew this was going to happen and they encouraged it. That is loony tunes. And do you know why they’re saying that? Because if the president didn’t know and it was actually pre-planned, he’s not guilty. So, for the first time today, they are trying to create a story line that Donald Trump was in on it before it happened, that he was monitoring the Proud Boys and other crazy websites and he knew they were going to come to Washington with the violence on their mind, and he encouraged it. That is beyond bizarre. This is not evidence. This is a liberal Democratic novel being presented as evidence.” … (Please remember to leave your comments below)