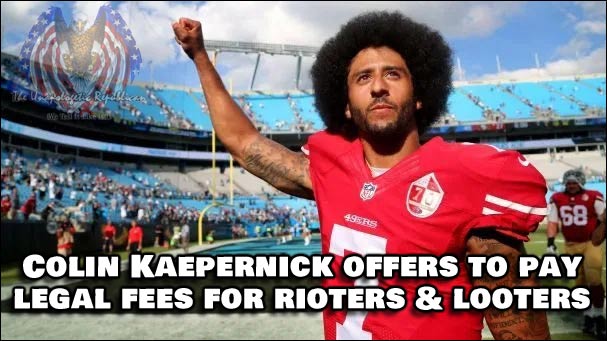 Colin Kaepernick and other Liberal Hypocrites Are Offering To Pay For Rioters’ Legal & Court Fees.

Well, well, well. Look at what we have here. Liberals and Hollywood stars/starlets and sports figures around the country have stepped up to offer help to, NO Not the business owners who lost their businesses to the looting and riots, but to the people doing the actual rioting, the looting and the assaulting. All of a sudden, their ‘playful’ mockery of an entire race has disappeared from history; Well in their eyes it has. Conservatives know the truth though. We do not forget, even if you attempt to wipe history from the internet, some one can always find it. (LIBERAL Actors and politicians who have done the ‘black face‘ include Jimmy Kimmel, Jimmy Fallon, Ted Danson, Megyn Kelly, Colton Haynes, Fred Armisen, Alabama Governor Kay Ivey, Sia, Joy Behar, Virginia Governor Ralph Northam, and the list goes on and on, even Canadian Prime Minister Justin Trudeau admitted to doing it.) But all of a sudden, they all forgot about their mockery. The George Floyd incident happens, and they all forgot about their past actions. … Listen, I understand the concept about the whole Black Lives Matter movement, although I don’t agree with any of the violence they bring forth and/or encourage. Just look at Martin Luther King Jr, the man moved mountains without ever lifting a finger to violence. The man CHANGED THE WORLD using ZERO violence. He was, and still is, the perfect example of ‘protesting peacefully’. If you look up ‘Peaceful Protecting’ in the dictionary, Martin Luther King Jr’s picture and biography should be there.

Now comes along the horrendous situation between 4 police officers, and a man that supposedly passed a counterfeit 20 dollar bill. His name was George Floyd, and his death was unnecessary and a horrible, atrocious event. I personally hope the legal system does the right thing, and brings all 4 of those officers to trial, and face justice. I’ll leave the legal stuff to the courts and lawyers, but there is no doubt that a very WRONG thing happened, and people need to be held accountable. But enough about the legal side, there’s people out there that agree and dis-agree on all sides, so there’s no point on trying to convince anyone into altering their view or beliefs of what they saw happen.

Not all of the ‘peaceful protests’ stayed that way though. It appears that people, other than ‘locals’, were being brought into the protest areas, were given weapons (bricks) and were paid (there’s video proof) to specifically riot, loot and assault. For those people, their only reason for being there was to spread hatred, division and violence (and steal). The rioters ended up doing, at a minimum, millions and millions of dollars worth of damages to stores, businesses, buildings, cars; You name it. I even saw one guy ‘beating up’ flower pots that a town had lining the street. They assaulted people, beat people, shot people, killed people. They did all that to police officers too. Just like George Floyd, innocent people AND police officers paid the ultimate sacrifice due to this violence; They paid with their lives. … And now, here comes the Liberal Troops verbalizing support for the violent rioters. Most of us want those rioters held accountable, and charged with crimes! .. But again, here comes Hollywood and other liberals to help pay their legal fees, bail fees, lawyer fees, penalty fees, court fees, etc. Joe Biden and his ‘team’ have offered help pay, Justin Timberlake publicly reached out and offered to pay for the rioter’s legal fees. Colin Kaepernick is doing the same, in fact he referred to the rioters and looters as “Freedom Fighters.” Chrissy Teigen and John Legend have pledged $200,000 in support. Lil Nas X chimed in with his support for the Minnesota Freedom Fund. Gabrielle Union-Wade, Ashley Ford, Rapper Noname, Janelle Monae, Jameela Jamil, Blake Lively, Ryan Reynolds, Seth Rogen; and the list goes on. In addition, dozens and dozens of charity raising sites, like GoFundMe, have seen an explosion of new accounts opened, asking for funds to help out the rioters and looters that have been charged and arrested. … I have one question, what about the business owners and the individual people who got beaten? .. Where’s their support? .. So Justin Timberlake will shell out thousands of dollars to get a rioter out of jail AND cover his/her court costs, but he’ll let the business owner, whose store was burnt down by the same rioter, starve and go homeless. Yeah that makes sense …. #EveryLifeIsPrecious …. COMMENT BELOW.

I won’t be supporting any athelete, business, person or politician who remotely condones the rioting & looting. BLM doesn’t care about the black lives they’ve destroyed or the black police officers they killed.