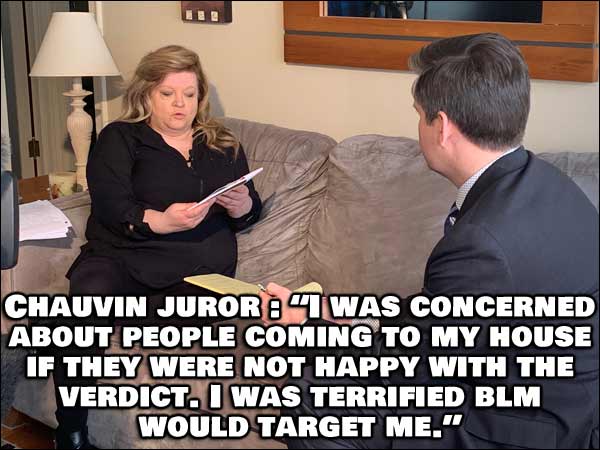 This past Tuesday, as most of the world watched live, a jury found former police officer Derek Chauvin guilty on all 3 counts he was charged with. Guilty of second-degree murder, third-degree murder and second-degree manslaughter of George Floyd. Even though the wanted result (by liberals) was received (guilty on all three counts), the end of the case still brought riots and violence. Even though all 3 counts ended up with guilty verdicts, screaming liberals on the Left like VP Harris said “It’s not enough”, which of course will only bring us more violence and more riots.

The Derek Chauvin case almost ended up as a mistrial. During the case, some very prominent people, especially in politics, stepped forward to voice their opinions about how the case should end. Problem is the case was not over, and they should have kept their mouths shut. Maxine Waters is a perfect example. Both ‘President’ Joe Biden and ‘VP’ Kamala Harris also weighed in, but definitely should have waited until the case was over because what they did was open grounds for appeal.

What really happened with the jurors and behind their closed doors? A brand new interview has been released and the woman being interviewed was an alternate juror named Lisa Christensen. She actually lives right in Brooklyn Center and gave a little bit of a peek of what went on in the court room and behind the scenes. The interview was conducted by Kare 11 reporter Lou Raguse. He tweeted “I just had a fascinating sit-down interview with one of the alternate jurors in the Derek Chauvin trial. Lisa Christensen was the juror who lived in Brooklyn Center. One night she could hardly make it home after testimony ended because of protesters blocking intersections. Christensen thought Derek Chauvin was guilty. She said that Dr. Martin Tobin was the witness who influenced her the most toward that conclusion. That demonstration where the jurors felt their necks? Extremely effective.“

So, she already thought he was guilty, but did any ‘outside’ forces try to persuade the jurors votes? According to Christensen, there was ‘immense pressure to deliver a “guilty” verdict‘. Interviewer Lou Raguse said “This was shocking to me, but Christensen told me she and the other jurors didn’t even share their real names and occupations with each other. Just called each other by juror number. Got along but mostly made small talk. Concerned about saying ‘too much.’” Christensen outright admitted that jury intimidation played a major part in the trial. She stated “I did not want to go through rioting and destruction again and I was concerned about people coming to my house if they were not happy with the verdict.”

Dr. Martin Tobin was the witness who influenced her the most toward that conclusion.

That demonstration where the jurors felt their necks? Extremely effective.

Much much much more to come after I start putting this together. pic.twitter.com/HwOi3tFBRr

We can’t allow this to happen, he needs a new trial. A bunch of thugs antifa & blm need to be arrested and behind bars. Enough of this BS from the minority gang of thugs.