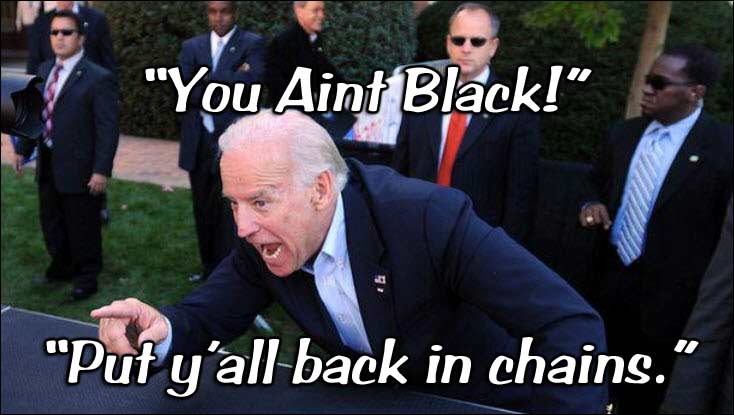 Joe Biden’s Racism has always been on full display. “You Aint Black!”

There are so many reasons why Joe Biden would be bad for America that entire books have been written about it.

Liberal Privilege: Joe Biden And The Democrats’ Defense Of The Indefensible by Donald Trump Jr., and

Joe Biden Unauthorized: and The 2020 Crackup of the Democrat Party by Mike McCormick are just two of them.

Since we are limited by the confines of a single article here, and (thanks to the BLM and Antifa focus on racism this year) we will also make Joe’s racism our focus.

But Biden’s racism goes back much further than 2006. In the early 1970s, he vocally opposed busing to achieve school desegregation.

In 1994 he wrote the Violent Crime Control and Law Enforcement Act, “a laundry list of the worst aspects of the mass incarceration state. It led to a boom in the number of police officers and prisons, lengthened prison sentences, and created financial incentives to keep people in jail. It created 60 new death penalty offenses as well as the infamous “three strikes and you’re out” rule, which inflicted a life sentence for almost any crime, even ones considered very minor, if there were two prior convictions for “serious” or “violent” crimes. Since then, people have died in prison for things like stealing a dollar in loose change from a parked car, possessing less than 1 gram of a drug, and attempting to break into a soup kitchen” according to the Left Voice.

Biden still contends, “On balance the whole bill … did in fact bring down violent crime.”

In 1983 Biden worked with Strom Thurmond, the senator from South Carolina on the Comprehensive Forfeiture Act, which increased the use of civil asset forfeiture by police departments across the country. This act allows the police to seize and sell any property involved in a crime, even if the owner is not arrested or convicted. Sadly, it mostly affects working class and poor people, especially if they are Black.

Biden’s most formidable opponent, especially when it comes to matters of race, may be himself. …. Please drop your comments below.

Thank you for highlighting this man’s racism. Joe B. recently played “Despacito” to a Puerto Rican crowd in Kissimmee, FL. It was a cringe moment that may have cost him the Hispanic vote in a battleground state. He is completely out of touch with POC!