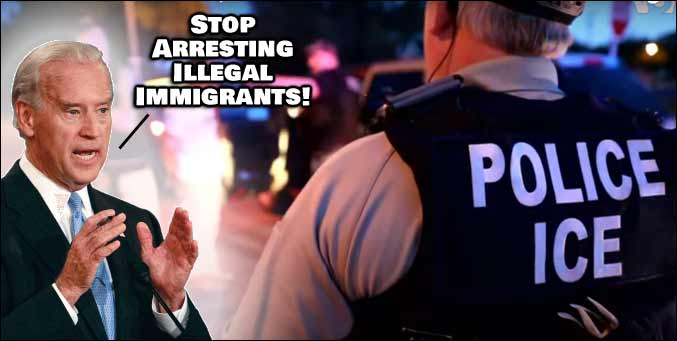 The following article was written by Tom Homan, who is the former Acting Director of Immigration and Customs Enforcement (ICE – https://www.ice.gov/). He’s also senior member over at the Immigration Reform Law Institute (https://www.irli.org/). He’s written this letter in response to ‘President’ Joe Biden telling the department of Immigration and Customs Enforcement (ICE) to ignore the law, stop arresting people (illegal immigrants), and basically totally ignore their jobs, their responsibilities, and their oaths. Biden just wants to end all immigration enforcement, PERIOD. What Biden is asking is actually illegal, read the letter yourself down below. If you haven’t had your eyes opened to Biden’s real agenda, this should help you see the light a bit clearer. :

On Jan. 20, Acting Department of Homeland Security (DHS) Secretary David Pekoske sent an operational memorandum to the leadership of U.S. Immigration and Customs Enforcement (ICE), Customs and Border Protection (CBP), and Citizenship and Immigration Service (CIS). This memorandum functionally ends all immigration enforcement and will result in dangerous criminals escaping justice and walking the streets.

The memorandum instructs the agencies to ignore the law as referenced in the Immigration and Nationality Act (INA), a law enacted by Congress and signed by a president. It directs them to ignore written statute and a federal judge’s order regarding a person that has had due process at great taxpayer expense. Both of these instructions clearly represent a violation of the law.

A federal judge in Texas has put a 14-day stay on the memo going into effect, but that needs to be extended. Here’s why.

The memo will result in career law enforcement officers having to ignore the oath they took to enforce the law. What is even more disturbing is when I looked at the memo’s properties, it appears to have been written by Esther Olavarria, whom I consider to be an anti-immigration enforcement advocate — and who now serves as Biden’s deputy director of the Domestic Policy Council for Immigration.

This document was crafted in a vacuum and was not coordinated or discussed with the career operational personnel who understand the realities of enforcing immigration law. It was so quickly written — with a desire to end immigration enforcement immediately — that they sent it out with typographical errors and failed to clean the properties that showed who wrote it. Those involved with this memo and its issuance will have a heavy burden to bear when the alien criminals it protects reoffend and innocent victims are raped or killed as a result.

What’s even more unbelievable is that the Acting Secretary of Homeland Security signed it and issued it. This memo is the most anti-law enforcement and pro-criminal instruction I have seen in my nearly 35 years of enforcing state and federal law. It protects serious public safety threats, including gang members who will continue to victimize our communities and citizens. It is a community safety nightmare.

Let me be very clear: This memo will result in lives lost. People will die.

Here are the exact consequences of this memo. Anyone who entered this country in violation of law prior to Nov. 1, 2020 cannot be removed. Even though they violated the law of illegal entry, or entered after being deported, which is a felony, they get a pass for at least 100 days and probably forever. The only exceptions are those involved in terrorism or who have agreed to be removed, which is not likely going to happen. There is no exception for rapists, child predators, murders or any other serious criminal.

As of the Jan. 20 memo, these types of aliens will no longer be removed.

These serious public safety threats will remain free and cannot be deported — even though a federal judge has ordered them deported.

Let me cite an example: Let’s say ICE knows where an MS-13 gang member is living. He has a removal order issued by a judge. He has entered the country numerous times illegally. He has a conviction for child rape, but because he entered the U.S. before Nov. 1, 2020, ICE cannot arrest and remove him. They cannot execute a federal judge’s order. The dangerous gang member is shielded by the Biden administration’s memo.

Another part of the memo instructs that ICE will no longer be allowed to take custody of criminals that are being released from jails and prisons unless those released have convictions for an aggravated felony, among the most serious felonies. That means if the jail releases an illegal alien that posts bond for a rape charge but has not yet been convicted, ICE cannot arrest, take custody or even process him for immigration court referral.

Being in the country illegally is no longer enough reason for ICE to enforce the law. But here’s the catch: Even if the alien has a conviction for an aggravated felony, he still cannot be deported if he was in the country prior to Nov. 1, 2020. Sheriffs will have no choice but to release dangerous criminals back into your community to reoffend.

On top of all of this, Congress has defunded ICE by more than $300 million, so the agency can only afford 31,500 adult detention beds, a 40 percent decrease. Not only are criminals that are already here safe from arrest and deportation, but those that enter the country illegally after Jan. 20 will not likely be detained because there are not enough beds. We are back to catch-and-release at a time when we are struggling with a global pandemic. An anti-borders agenda that includes catch-and-release is not a serious COVID response at all. It will result in the intentional importation of thousands of COVID cases.

The anti-borders advocates now in control of our immigration laws will cause great harm to our communities. Crime will rise, people will be victimized, and some will die at the hands of criminals the Biden administration has chosen to protect.

This memo will also add to all the other enticements that President Biden has promised, including amnesty, ending the Remain in Mexico Program, a moratorium on deportations and free health care for illegal aliens. The border will soon be out of control because of these promises.

The biggest insult of all is that this memo says all of DHS law enforcement are needed to reprioritize because they must deploy and surge to the southwest border to deal with “significant operational challenges.” What they failed to mention is that this administration — because of its own words and actions — is directly responsible for the out-of-control border situation that has already begun.

**Tom Homan is correct when he says all this, and who would know better than a former Director of I.C.E.? It’s as if Joe Biden and his administration is 100% ANTI-American (They are!). Why else would someone want illegal immigrants to be able to come here un-vetted, and to be taken care of by American tax payers? There’s more legal restrictions right now on American citizens than there is on incoming ‘illegal immigrants’ (which by the way is a ‘term’ that the Biden administration is trying to block from being used because it’s ‘offensive’.) …. Thoughts? Please feel free to drop your comments below.