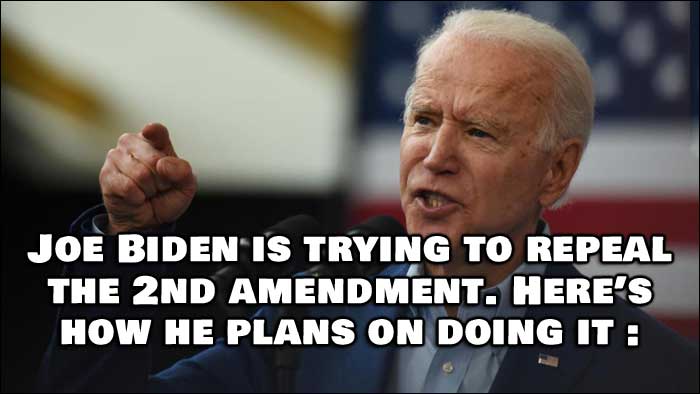 We all knew that Joe Biden was a gun grabber. He mentioned multiple times during his presidential campaigns that he wanted to restrict the sales of ‘assault rifles‘, reduce the maximum amount of ammo a magazine or clip can hold, and just plain make it harder for honest, hard working American citizens to legally obtain a fire arm. If you read between the lines, it seemed as if Joe Biden was going to go after the NRA, the 2nd Amendment, existing American gun owners, and future gun owners; And he just did. ‘President’ Joe Biden is looking to make sweeping changes to guns laws in this country. Enough changes to where it greatly affects/restricts the 2nd Amendment of the United States Constitution. .. The lists below are the ‘changes’ that ‘President’ Joe Biden wants to make to federal gun laws. It’s referred to as HR127, it’s known as the ‘Sabika Sheikh Firearm Licensing and Registration Act‘ and it was originally introduced by nut-job Sheila Jackson Lee (Democrat out of Texas’ 18th District) … (as usual, all Sources listed at end of article) :

#1 – Firearms License required for any new gun purchases or ownership transfers.
▪️ Licensee Must be 21, complete a 24 hour gun safety training course, and must undergo a psych evaluation.
▪️ Multi-tier license. Individual license for ownership and display of “antique” firearm, standard firearm license, and “military style” license.
▪️ Military license requires additional 24 hour safety course.
▪️ Licensing is revoked immediately for anyone indicted of a crime in which the sentence lasts longer than 1 year.
This heavily discriminates against anyone who has ever seen a therapist or had to get mental health treatment, such as victims of abuse and people with depression, and veterans seeking care for PTSD. Depression and addiction are mentioned specifically as reasons for licensing denial.
Also, gun licensing is expensive, which makes ownership less accessible for those who need their own protection most.

#2 – Requires an $800 annual government insurance fee for all current and future gun owners, to be paid to the Attorney General EVERY YEAR.
There is no grandfather clause, meaning this applies to anyone that owns a gun at all, not just those who purchase a new firearm after this passes.
This fee will certainly go up each year. It’s yet another barrier for those in poverty to be able to defend themselves.

#3 – Mandatory Nationwide Firearms Registration & Database
▪️ ALL firearms owned shall be registered under penalty of up to $150,000 and 15 years in prison.
▪️ Serial, make, model, date, identity of owner, and the location of where the firearm will be stored to be collected and maintained in a database by the US Attorney General.
▪️ Names and information of all those who may have access to the firearms shall be collected as well.
▪️ This information to be accessible by state, local, and federal police, military, as well as state and local governments.

#4 – Ammunition and Magazine Bans
▪️ Bans .50cal and larger ammunition outright.
▪️ Bans all mags that hold more than 10 rounds
This ammo is mostly used for hunting and is rarely used against people. The most common handguns and rifles use magazines that exceed this arbitrary limit, which makes TENS OF MILLIONS of law-abiding gun owners felons overnight.
Illegal ownership of even a single round of banned ammo will result in up to $100,000 in fines AND 20 years in prison.

Whew, that was a mouthful! .. Do you feel as if Biden is stomping on our 2nd amendment rights? .. Please feel free to drop your comments below.

Fuck him !! We The People need to get rid of this son of a bitch and the rest of his socialist scumbag DEMORATS !! They come for my guns they’d better bring theirs….cause there’s gonna be alot of lead flying !!

Biden is a wolf in sheep’s clothing. He is an evil-serving, lying, thieving mass-murderer. And those are his good points. His day before the tribunal is soon coming.

They won’t get away with this.

This bill will kill the 2nd Amendment. This must not pass.

This is an act of WAR!!!!! We the people have stayed silent on big tech sensorship. I refuse anybody trying to corrupt our CONSTITUTIONAL RIGHTS!!!!
If we don’t stand up for this we won’t have the power to stand for anything else that they will try!

This will only happen if we keep cowering in the corner like scared sheep. Yes unfortunately when all this starts some people are going to die but I am ready today if it means saving my country for these commie bastards and yes this will have to happen for us to save our country. Do I want to see this country have a civil war hell no but it is looking more and more like it everyday. The longer we sit back and let them chip away at our god given right of freedom only emboldens them more everyday sooner… Read more »

How sad to see how the Democrats think they can take away our rights as Americans. They need to be stopped at all costs. This is how Nazi Germany almost wiped out the Jewish population from Germany, imagine what the United States Government would do to you if you and I are disarmed? History can not and will not repeat itself, we must ban together and fight Washington and the leftist’s agenda!

Unconstitutional, especially the psych testing.I want all in Congress to under go one, and drug testing, too.

Congress shall make NO law…
So, HELL YES, Biden is committing treason and should be hung for it. NOW! And so should ANY government official who votes for it, or intends to TRY to enforce it!

It’s time to stop these law makers from making laws that go against our constitution. And anyone to present a bill that goes against or change is shall be tried for treason. Any changes in the Constitution to be changes would have to be votes on by all American people, by a 100 percent vote for or advanced the changes.

The Constitution simply and literally states that the Government “shall not infringe on the right to keep and bear arms in any way.” There is no way to debate that point. The 2nd amendment is there to restrict government not the governed.

Get rid of them NOW