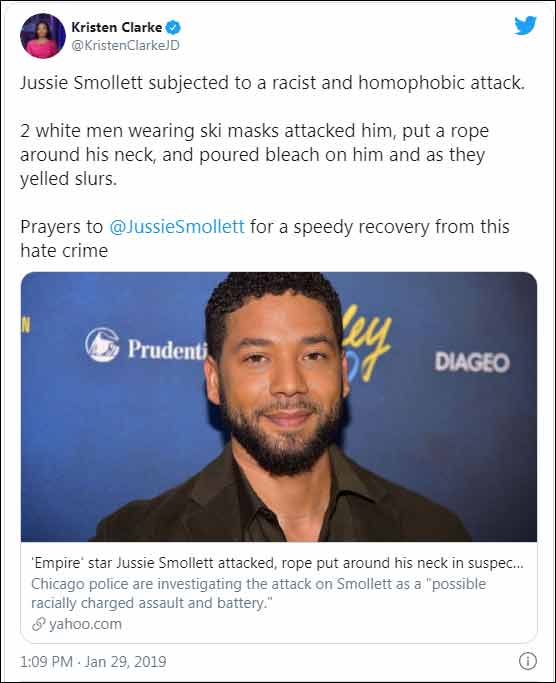 Kristen Clarke, who is Joe Biden’s nominee for Assistant Attorney General for the Civil Rights Division at the Department of Justice, tweeted back in 2019 multiple times when defending Jussie Smollett after he falsely accused 2 figments of his imagination (allegedly Two ‘made-up’ White Men who also happened to be Trump supporters) for assaulting him and screaming racist & homophobic slurs. According to the FAKE STORY Jussie Smollett told police, he was attacked and assaulted by 2 (two) white men who were wearing ski masks. According to Smollett, they allegedly put a rope around his neck, poured bleach on him, and yelled racial slurs at him. But we all know this was a LIE. The entire story was made up, and Jussie Smollett was busted crying fake racist attacks by white, male Trump supporters. Smollett did have his supporters though, one of them being Kristen Clarke. Back on January 29th, 2019 she tweeted “Jussie Smollett subjected to a racist and homophobic attack. 2 white men wearing ski masks attacked him, put a rope around his neck, and poured bleach on him and as they yelled slurs. Prayers to @JussieSmollett for a speedy recovery from this hate crime.” … But even after the event was proven to be false, Clarke REFUSED to withdraw her tweet. She did not even apologize for being wrong. The original tweet still sit’s on her timeline today. 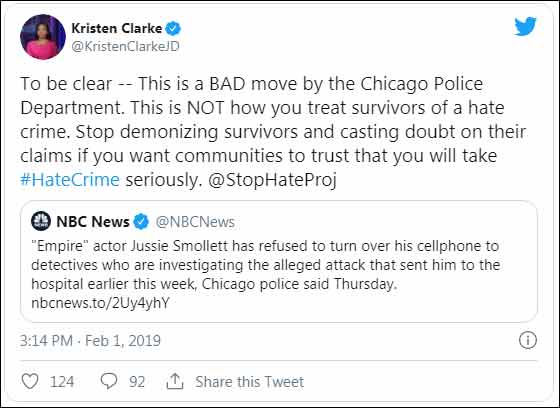 At one point during the Smollett investigation, Chicago police asked Jussie Smollett for his cell phone, they wanted to dig for information. Smollett REFUSED (most definitely because he knew he’d get caught in a HUGE lie) and Kristen Clarke took to Twitter again to shame the Chicago Police, calling their request to review Smollett’s phone a ‘bad move‘. .. Really? It’s all part of their investigation, so why is it considered ‘bad move’ by Clarke? Oh, I get it, it’s because the police would find out he was lying about the entire event. Clarke was also strongly hinting that the police investigation was RACIST, and was targeting Smollett because he is black. 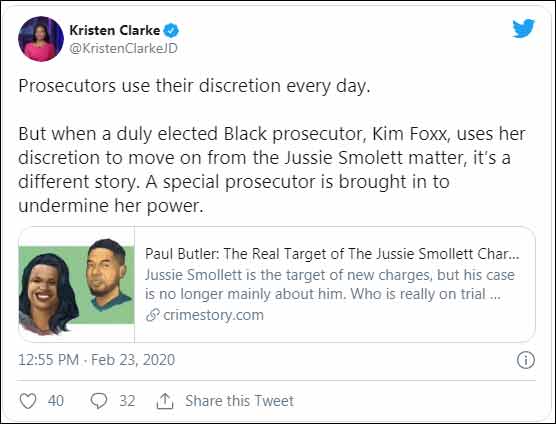 When prosecutor Kim Foxx (who happens to be black) went and dropped ALL 16 charges against Smollett, many people exploded with anger. Of course though it was turned into a ‘racist’ issue by the Left. Again with the gaslighting (http://unapologeticrepublican.com/you-are-being-gaslighted-again-and-again-and-again/). How can ANY prosecutor go and drop ALL 16 criminal charges against someone? It was quite obvios that PRIVILEGE played a huge part in this, and so did race. If Smollett was white, this would be a whole different story. But here comes Kristen Clarke again with her defense of everything Smollett related. In response to people having issues with prosecutor Kim Foxx dropping all 16 charges, Kristen Clarke tweeted “Prosecutors use their discretion every day. But when a duly elected Black prosecutor, Kim Foxx, uses her discretion to move on from the Jussie Smollett matter, it’s a different story. A special prosecutor is brought in to undermine her power.“

What REALLY happened to Jussie Smollett? It seems as if he PAID 2 brothers (Abimbola and Olabinjo Osundairo) to fake the attack. Smollett paid them to ‘attack’ him and instructed them to yell racist and homophobic slurs at him. His final goal was then to contact authorities and point the finger at 2 non-existent white, male, Trump supporters. He was just doing his part at keeping up the fake stigma that all white, male, trump supporters are violent, racist, white supremacists. … Thoughts? Feel free to drop your comments below.