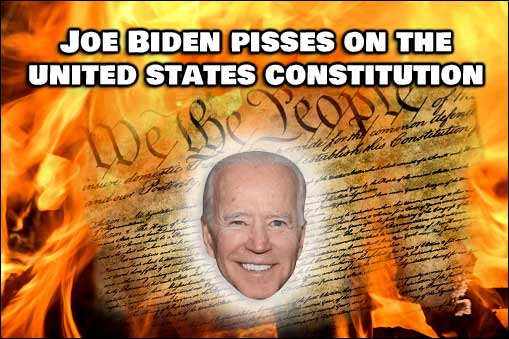 Joe Biden has only been ‘in office’ for 3 months now (about 90 days) and he’s repeatedly gone against the Constitutional Freedoms given to American citizens. These Freedoms are all God given rights. If you’re unsure of that, read the Declaration of Independence (https://www.archives.gov/founding-docs/declaration-transcript) and the United States Constitution (https://www.archives.gov/founding-docs/constitution-transcript). What you are about to read about is absolutely terrifying. The ‘so-called’ President of The United States, Joe Biden, just spoke these exact words, “No amendment, no amendment to the Constitution is absolute.“. I honestly hope that everyone reading this understands the magnitude of what he said.

If you don’t understand the gravity of what this means, then please consider these 2 points :

2. This “so called” President said – “NO amendment, NO amendment to the Constitution is absolute. “ … Think about the gravity of that statement! .. I’ll help you understand it by breaking it down a bit :

The President of the United States of America just stated:

I hope this clears things up for you about the terrifying meaning behind Joe Biden’s words. In just 9 (nine) words, Joe Biden said that no right provided to you by the Constitution is absolute, or safe. …. Think about that! … Please leave your comments below.

Joe is crooked, a liar, a thief, and a baby killer. I pray that he’s soon gone, and that Kamala and Pelosi follow immediately out the door into oblivion.

Joe Biden nor Harris are maucharian fake ass presidents!! They are not our legitimate duly elected President & VP! President Donald J Trump is our real legitimately duly elected PRESIDENT!! BIDEN/HARRIS ARE TYRANNICAL TYRANTS OF TYRANNY TREASONOUS TRAITOROUS DOMESTIC ENEMIES & TERRORISTS!! THEIR INAUGURATION IS A FRAUD AND THEY WERE NOT SWORN IN NOR TOOK A OATH. THEY MADE A PROCLAMATION TO DESTROY AMERICA & US! SO HERE ALLOW ME TO MAKE THIS CLEAR TO EVERY AMERICAN CITIZEN. IF YOU DO NOT KNOW THAT OUR U.S. CONSTITUTION IS ABSOLUTE. THAT IT WAS WRITTEN TO GIVE US WE THE PEOPLE THE… Read more »

Why haven’t impeachment proceedings started yet? Why is the military not upholding their oath to protect the constitution from tyranny? When will the American people have enough ? This guy is a puppet for Obama….dementia ridden and merely a figure head for Obama and the “great reset” to destroy America and enslave us all. Most of our govt has committed treason and must be removed and prosecuted for Treason.