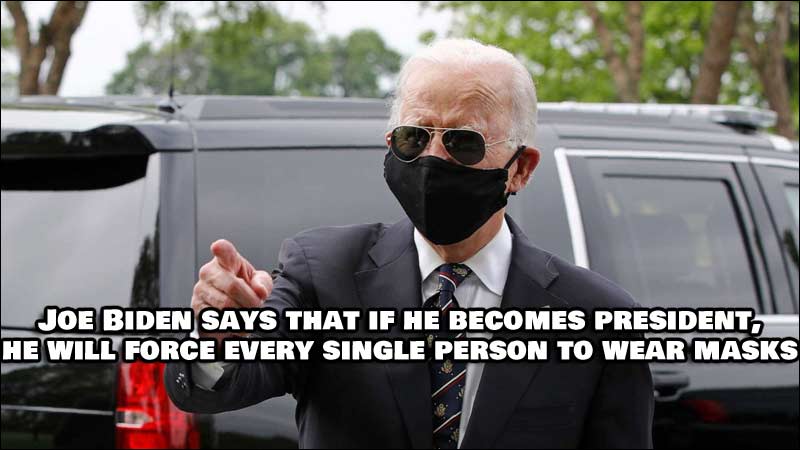 On Thursday, Joe Biden (the assumed Democratic Presidential nominee) stated to KDKA (a CBS affiliate) that he would authorize federal authority to require Americans to wear face masks in public if elected. This move would be certain to see outrage from many citizens throughout the country. He also discussed further action he wants done while reopening; but his main focus was wanting to see greater use of masks. “The one thing we do know, these masks make a gigantic difference. I would insist that everybody in public be wearing that mask,” Biden said. “Anyone to reopen, it would have to make sure that they walked into a business that had masks.” When asked if he would use “federal leverage” to require mask-wearing, “Yes, I would from an executive standpoint, yes I would,” he said. The interviewer asked if he would be mandating mask-wearing. “I would do everything possible to make it required the people had to wear masks in public,” Biden said.

Many states already require masks be worn out in many public places such as New Jersey. Other states say do what feels right, such as Wisconsin, and often leave it up to the store owner’s discretion. The Centers for Disease Control, calls for utilizing “cloth face coverings in public settings where other social distancing measures are difficult to maintain, such as grocery stores, pharmacies, and gas stations.”

You may think Republicans are all anti mask wearing and Democrats are all pro mask wearing. This however is not always the case. Marco Rubio (R-Fla) recently stated “everyone should just wear a damn mask.” But President Trump has not been seen in public wearing a mask, and has dismissed suggestions he should wear one. He has also suggested they could be counterproductive. “They put their finger on the mask, and they take them off, and then they start touching their eyes and touching their nose and their mouth,” Trump explained to the Wall Street Journal a week ago. “And then they don’t know how they caught it?”

All states that have taken the route of mandating masks are facing extreme controversy. Many proud conservative Americans do not like big brother imposing even more regulations. A sheriff that was deemed savagely heroic by some and vilified by others in Southwest Washington actually told citizens “not to be sheep” in response to Governor Jay Inslee’s new state wide mask mandating. Would you bend over and take it from the Government if you were required to wear a mask? Let us know in the comments below.

If masks were mandated I would have to take a stand against said mandate. I believe the cloth face coverings have been an exercise in futility and a prop, now even a fashion statement. I think the whole situation is ludicrous! If Covid were as deadly as they are saying ppl would be dead or dying everywhere. It just is not so!