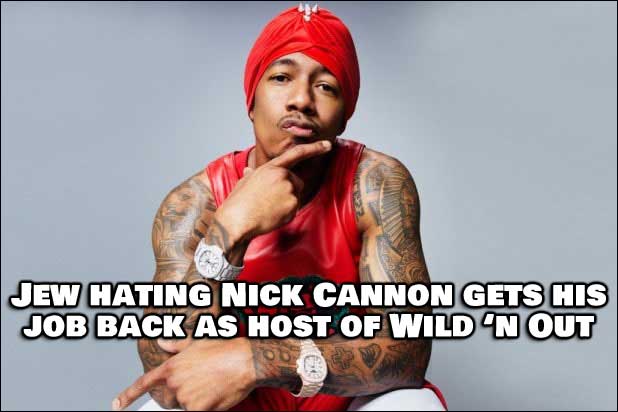 Back in July of 2020, Jew-Hating Nick Cannon was doing one of his podcasts, which was called Cannon’s Class, and was having a discussion with another Jew Hating rapper named Richard “Professor Griff” Griffin. It just so happens that ‘Professor Griff’ was a former member of the rap group Public Enemy. He was fired back in 1989 due to anti-Semitic statements he made. Fast forward to July 2020 to this particular podcast, and Cannon ended up promoting anti-Semitic conspiracy theories himself. Cannon also praised Nation of Islam leader Louis Farrakhan. In other tweets and interviews, Cannon has referred to all white people as “beasts” “closer to animals” and “true savages”; So he’s obviously a racist too. But here comes Viacom to give him his job back! They must have thought that 7 months must have been enough punishment for spewing hatred towards Jews and Whites.

Of course Cannon back peddled as soon as the sh*t hit the fan. He released a series of 5 tweets that attempted to be an apology “First and foremost I extend my deepest and most sincere apologies to my Jewish sisters and brothers for the hurtful and divisive words that came out of my mouth during my interview with Richard Griffin. They reinforced the worst stereotypes of a proud and magnificent people and I feel ashamed of the uninformed and naive place that these words came from. The video of this interview has since been removed. While the Jewish experience encompasses more than 5,000 years and there is so much I have yet to learn, I have had at least a minor history lesson over the past few days and to say that it is eye-opening would be a vast understatement. I want to express my gratitude to the Rabbis, community leaders and institutions who reached out to me to help enlighten me, instead of chastising me. I want to assure my Jewish friends, new and old, that this is only the beginning of my education—I am committed to deeper connections, more profound learning and strengthening the bond between our two cultures today and every day going forward.” … That’s so strange Nick because in another tweet, you referred to all white people as “beasts” “closer to animals” and “true savages”.

My message back to Nick Cannon, “F*CK YOU, you racist, anti-Semitic prick.” I wish your statements would have kept you from working any past jobs, but as we can see, MTV, VH1 and Viacom do NOT care. They just gave him his job back as host of the show. How is it that Roseanne (a Trump supporter) completely loses her show, but Nick Cannon gets praised? I’m guessing that Viacom are Jew Haters too, otherwise how do you explain their decision to hire back a self admitted Jew Hater?? … Thoughts? Drop your comments below.