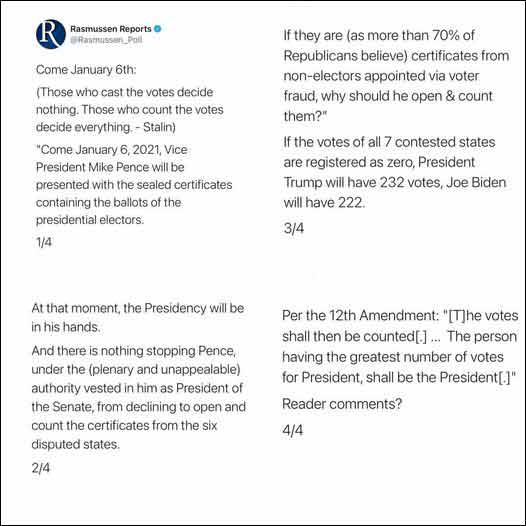 According to information released by Rasmussen Reports, it details exactly the method in which “America and President Donald J. Trump are saved.”. It leads us to expect quite a day on January 6th. The Rasmussen Reports information came to us in 4 tweets, which are pictured here in the article. They state : “Come January 6th : (Those who cast the votes decide nothing. Those who count the votes decide everything. – Stalin)” … “Come January 6, 2021, Vice President Mike Pence will be presented with the sealed certificates containing the ballots of the presidential electors. 1/4“

“At that moment, the Presidency will be in his hands. And there is nothing stopping pence, under the (plenary and un-appealable) authority vested in him as President of the Senate, from declining to open and count the certificates from the sic (6) disputed states. 2/4” .. “If they are (as more than 70% of Republicans believe) certificates from non-electors appointed via voter fraud, why should he open them? If the votes of all 7 contested states are registered as ZERO, President Trump will have 232 votes, Joe Biden will have 222. 3/4” .. “Per the 12th Amendment : “The votes shall then be counted …. The person having the greatest number of votes for President, shall be the President[.] 4/4“

AND to top that all off, according to a newly released Senate report, Joe Biden cannot be certified!! The Biden family has been proven as fully compromised per the official Report by the US Senate Committee on Homeland Security, Governmental Affairs, and Finance. The link to the Senate Document (HSGAC Report – https://www.hsgac.senate.gov/imo/media/doc/HSGAC_Finance_Report_FINAL.pdf ) … Thoughts? Comment Below.

How stupid are you people, there’s no supporting evidence on this site or anywhere!?