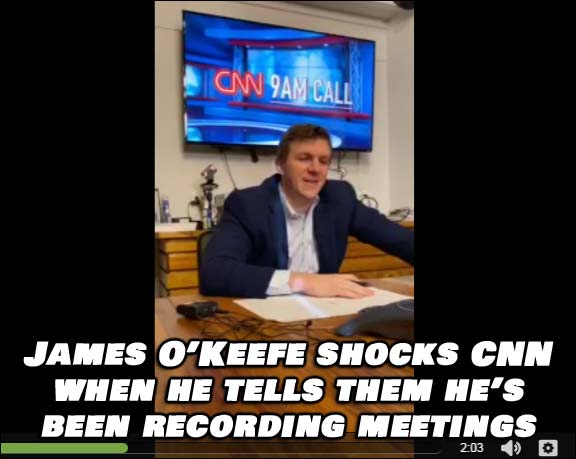 BOMBSHELL: James O’Keefe has been secretly recording CNN executive meetings for months and he just unmuted himself for the first time and confronted CNN President Jeff Zucker to broke the news to him. WATCH VIDEO BELOW.

Whoa Nelly, the sh*t is going to hit the fan over at CNN. Project Veritas head James O’Keefe dropped a bombshell early today that he’s been sitting in on conference call meetings between the top heads of CNN. Jeff Zucker (President), Marcus Mabry (Vice President of Global Programming for CNN Digital Worldwide), David Chalian (Journalist), Stephanie Becker (Journalist) and more have been caught on tape saying things that show their true self and their true purpose. They do NOT know they were being recorded. They did not know they were being recorded for so long.

Listen & watch to the video below. O’Keefe said he would begin to drop video clips of his recordings of CNN beginning tonight. I can’t wait to hear these, in fact I’m going to pop some popcorn for it. #CNNTapes

Video of James O’Keefe ‘breaking into’ a CNN Meeting to tell CEO Jeff Zucker the news :

Have an Opinion? Drop your comments below.

👏👏👏💓Can’t wait to expose the communist agenda! Finally!!! On the offense instead of always being in the defense! Congratulations!!!

Yes!!! They need to be exposed!

YEAH, I am so excited about this…where are the tapes!?