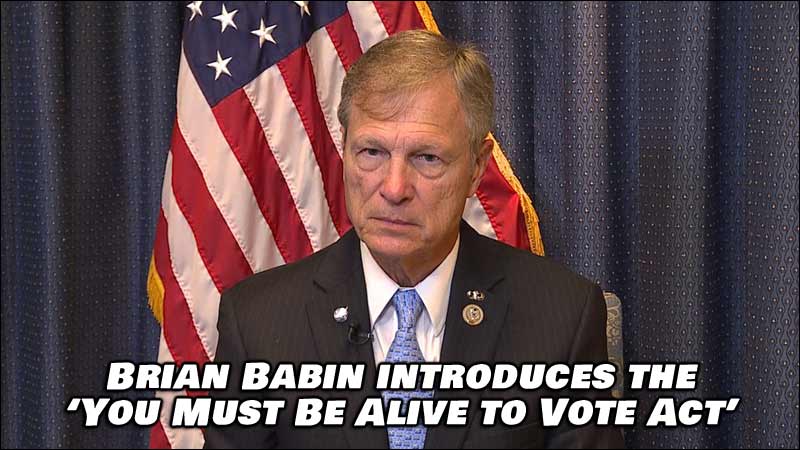 Yes, you heard that correctly. In fact, Republican Brian Babin, who has served as the U.S. Representative from Texas’s 36th congressional district since January 2015, has introduced a bill that would force states to confirm that a voter is alive (living; not dead) BEFORE they voted. This would be done via confirming with the Social Security Administration. If the SSA says the person is alive, then they may cast their ballot.

Representative Brian Babin explained his bill, “My bill would actually penalize these states and these counties from getting any kind of federal money from the Department of Transportation or the Department of Education if they do not [update registration lists] on an annual basis.”. He is naming it the ‘You Must Be Alive to Vote Act‘. It’s purpose is to ensure election integrity, going forward from the 2020 elections. Elections which appears to have been ‘rigged’, as per President Trump.

Babin went on “The right to vote is one of the most vital pillars of our democracy, the foundations of which are election integrity and confidence in our democratic processes. The ease with which someone is able to steal the ballot of a deceased person and cast an illegitimate vote should disturb, alarm, and outrage every American citizen, no matter what side of the aisle they sit on. To protect our democratic process and Americans’ faith in our elections, we must ensure that deceased individuals are not allowed to remain on state voter rolls. This bill is a necessary item that we must introduce in light of the fact that we still have a lot of problems with a lot of perception out there by half of America that we don’t have an open and transparent election process. You would think it would be unnecessary to have a bill like this. I mean, it goes without saying, you should be alive before you get to vote‘”.

President Trump, Rudy Giuliani & his legal team, Sidney Powell, Lin Wood, and others have alleged that a good number of ‘dead people’ voted in this recent election, which has been met with condemnation from some election officials.

“Many people received two, three, and four ballots. They were sent to dead people by the thousands. In fact, dead people, and we have many examples filled out ballots, made applications and then voted, which is even worse. In other words, dead people went through a process. Some have been dead for 25 years,” Trump said last week in an address.

It seems as if Trump is doubling down, the Trump Campaign just filed a lawsuit in Nevada. They are telling the judge that they proof that the names of dead people appeared on ballots in last month’s election, and that over 42,000 cases of “double votes” exist.