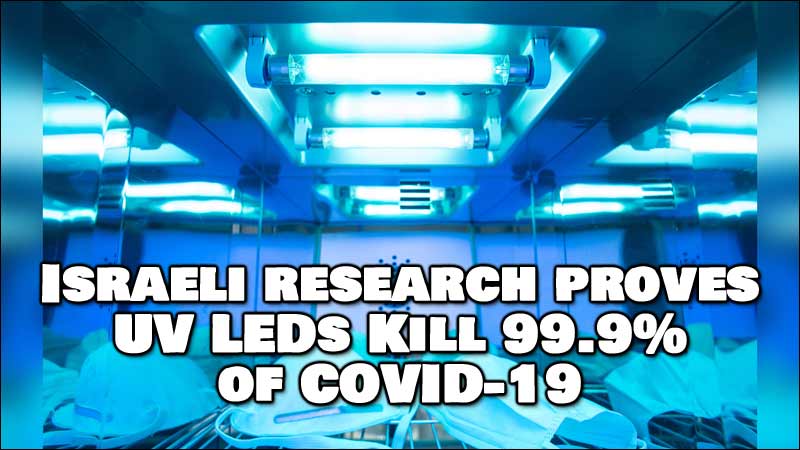 I never get tired of saying this; Trump was right again! Back in April 2020, during a White House coronavirus briefing, William N. Bryan (the head of science at the Department of Homeland Security) stated that they were testing how sunlight (and disinfectants) can kill the coronavirus on any surface in way under a minute. Trump then asked “Supposing we hit the body with a tremendous — whether it’s ultraviolet or just very powerful light? And I think you said that hasn’t been checked, but we’re going to test it?”. Trump continued “And then I said, supposing you brought the light inside the body, either through the skin or some other way.”. The Left took this a ROARED with laughter. Accused the President of actually telling people to inject bleach into their veins. He did question whether a disinfectant (other than light) could be administered through the body, but it was far from what the Left were moaning about.

Here comes good ol’ Israeli research that actually proves the UV light notion to be true. Some say ultraviolet radiation is the best known way to kill bacteria and viruses. A bombshell study from Tel Aviv has proven the strain SARS-CoV-2 can be quickly and effectively killed by using ultraviolet light-emitting diodes (UV-LEDs) at certain frequencies for pennies on the dollar.

Professor Hadas Mamane, the head of Environmental Engineering Program at Tel Aviv University’s School of Mechanical Engineering, didn’t mince words when asked about his study. “We discovered that it is quite simple to kill the coronavirus using LED bulbs that radiate ultraviolet light,” proclaimed Mamane. “The UV-LED bulbs require less than half a minute to destroy more than 99.9% of the coronaviruses.” Mamane wasn’t alone in the study however, she had two other professors involved as well (Prof. Yoram Gerchman and Dr. Michal Mandelboim).

Mamane speculates this innovative technology is the future, going on to say she believes that by 2025, it will be affordable enough to go mainstream.

“UV LEDs have a huge future. Of course, as always, when it comes to ultraviolet radiation, it is important to make it clear to people that it is dangerous to try to use this method to disinfect surfaces inside homes. You need to know how to design these systems and how to work with them so that you are not directly exposed to the light.”

I had read several years before about a study done on UV light and killing virus in the blood stream. I knew what Trump was talking about. As he has no medical background I don’t think he knew the terminology to describe it.