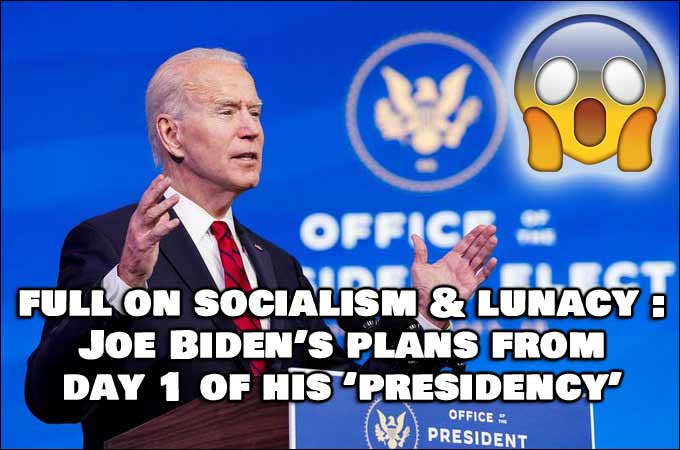 Oh crap. It’s happened. Joe Biden has been inaugurated as the 46th President of the United States. Although almost half this country strongly believes that Joe Biden stole the election, on January 20th, 2021, thus beginning his trek as President Of The United States. (BLECH, I just got chills and feel like I have to puke, just from saying that). Today’s Democrats are not like yesterday’s Democrats. You can’t look at someone like Joe Biden and even begin to compare him to a past Democrat such as John F Kennedy. Today’s party has moved way left, and in many eyes, have become much more of a Liberal party; The whole side bordering on Socialism and Communism. While Democrats of old looked out for Mr American Working Man ans his family, this new party wants nothing to do with them. It’s all about illegal immigrants, gun-free, government dependent living. We’re become a ‘3rd world country’, and today’s Left is loving it.

Here’s a list of what Joe Biden has promised to do starting Day One of his ‘Presidency’ :

What’s down the line from all this? Most definitely more Liberal ideology. Socialism is coming at us at full throttle, and what’s crazy is that there are at least a couple of ignorant generations that welcome it. I see a lot of chatter online from the younger generations, who were obviously not taught in school about the failures of socialism and communism, who actually praise socialism and are outright calling for it here. I say let’s take them all and drop them in Venezuela for a week. They’d come home a completely different person with a completely different outlook on socialism. The Venezuelan people at one point were paying over $150 for a gallon of milk, and resorting to eating their own pets for food.

It’s time like this that we need to Hope, and Pray .. and while we’re at it, cross some fingers and toes too, that SOMETHING happens. One of these rumors of Martial Law or Insurrection Act be true, otherwise buckle up buttercups, because we’re in for one hell of a 4 year run of full socialism. … Thoughts? Drop a comment below.

I would comment but my life would be in danger, my I tenet will be taken down, my door would visited by strange officials in dark clothing, I would have everyone I ever talked to investigated, I would more than likely be snatched and thrown in re-education camps perhaps never to be seen again. So with that said, come and get me! Because this country is no more, we will become the USSA on 20 January.

Not if we have anything to say about it….
I will NEVER yield to the socialist left.

Better to die on your feet than live on your knees.

I would rather die standing and free then live kneeling and chained.

I took an Oath when I enlisted. That Oath means as much to me today as it did when I first took it. China Joe and his coharts are enemies of America plain and simple.

same here dear… as everyone in congress and senate took same oath… and they have been derelict in their duties!!!

Not in our Country Sleepy Joe !!!!! 75+ million will be standing against your left agenda politics

I hope the pipeline won’t cancelled.

What can a person say? We are headed directly towards Anarchy, Communism, Socialism and destruction of our Republic. My heart hurts!! Biden is a puppet of the Aggressive Democrat Regime. 😟😥