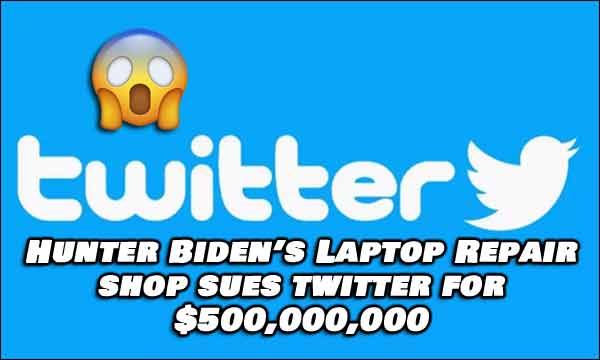 In today’s world, you just can’t go around and call people certain names, or publicly categorize them incorrectly. Defamation is a nasty witch, and it’s quite costly no matter which side you sit on. Here we have a social media tech giant, Twitter, versus a small computer repair shop out of Delaware. When the NY Post first broke the story about the infamous Hunter Biden laptop, instead of addressing the issue head on, Twitter took its usual route to discredit the news as fake, and in their reasoning why (their ‘fact checking’ process) called the computer repair shop owner a ‘hacker’.

Easy peasy for Twitter. Label the news as fake, call the shop owner a ‘hacker’; Narrative Set, now let’s move on … BUT hold up. Here comes shop owner John Mac Isaac and his attorney Brian Della Rocca. They slapped a $500 Million Dollar defamation lawsuit against Twitter. The lawsuit states “Defendant’s actions and statements had the specific intent to communicate to the world that Plaintiff is a hacker. The term ‘hacker’ is widely viewed as disparaging, particularly when said about someone who owns a computer repair business.”

The lawsuit text continues “Plaintiff is not a hacker and the information obtained from the computer does not [include] hacked materials because Plaintiff lawfully gained access to the computer, first with the permission of its owner, Biden, and then, after Biden failed to retrieve the hard drive despite Plaintiff’s requests, in accordance with the Mac Shop’s abandoned property policy. Plaintiff, as a direct result of Defendant’s actions and statements is now widely considered a hacker and, on the same day Defendant categorized the Plaintiff as a hacker, Plaintiff began to receive negative reviews of his business as well as threats to his person and property.” Dan Bongino spoke a bit about it today on his podcast, “The lawsuit, which is seeking $500 million in damages from Twitter, comes after the shop’s owner was forced to close his doors and go into hiding after receiving death threats for his role in exposing the story.“

But is $500,000,000 enough? Shouldn’t it be an amount that actually HURTS Twitter? … What are your thoughts? Please let us know in the comments below.