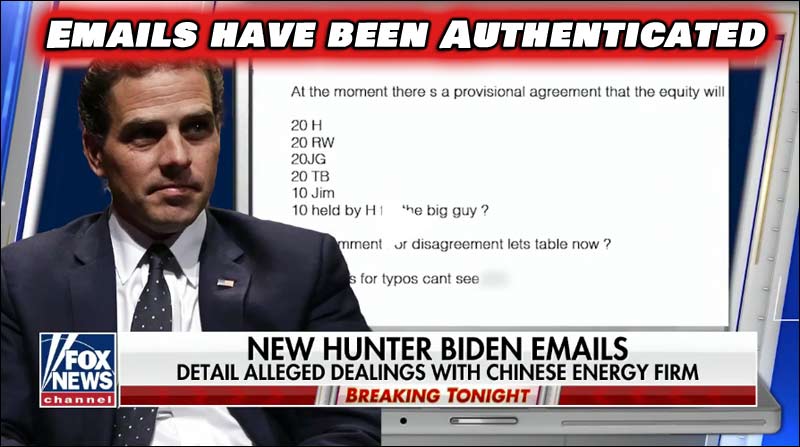 The Source on alleged Hunter Biden email chain verifies message about Chinese investment firm. The authentication of these e-mails from Hunter Biden’s laptop confirms Joe Biden, candidate for President of the U.S. has been an agent of China. Sources have told Fox News that ‘the big guy‘ is a reference to the former vice president. One email, dated May 13, 2017, and obtained by Fox News, includes a discussion of “remuneration packages” for six people in a business deal with a Chinese energy firm. The email appeared to identify Hunter Biden as “Chair / Vice Chair depending on agreement with CEFC,” in an apparent reference to now-bankrupt CEFC China Energy Co.

The email includes a note that “Hunter has some office expectations he will elaborate.” A proposed equity split references “20” for “H” and “10 held by H for the big guy?” with no further details. Fox News spoke to one of the people who was copied on the email, who confirmed its authenticity.

Another email from May of 2014 shows Vadym Pozharskyi, an adviser to Burisma’s board, allegedly shows him asking for the younger Biden’s advice on how to stop “politically motivated actions.”

“We urgently need your advice on how you could use your influence to convey a message / signal, etc. to stop what we consider to be politically motivated actions,” it reads. And less than a year later, a purported email from Pozharskyi shows him thanking Hunter Biden for an invitation to meet his father.

The CCP owns Joe Biden as his influence has been sold to the Chicoms, Iraq, Russia, Kazakhstan, in decades long pay to play.

The gravity of these revelations is incalculable as this wields complete leverage to China in the event of a Biden win.

The subversion of our very sovereignty as a free nation is catastrophic Joe Biden has been selling out the U.S. to massively enrich himself, his crack addicted son, and Joe’s family.

What this corrupted politician has committed against the United States of America is tantamount to treason.

These facts on this report have not been refuted.

Twitter, FB along with the MSM has been suffocating this story to protect “their guy”. And their guy, Joe Biden must face the investigative scrutiny that these bombshell revelations have exposed.

Biden must be held to account and prosecuted for his decades long treasonous activities against America.

Nothing less.   … Opinions?? Drop You Comments Below.

I hate to be negative and agree with you. Nothing ever happens to the corrupt Democrats.