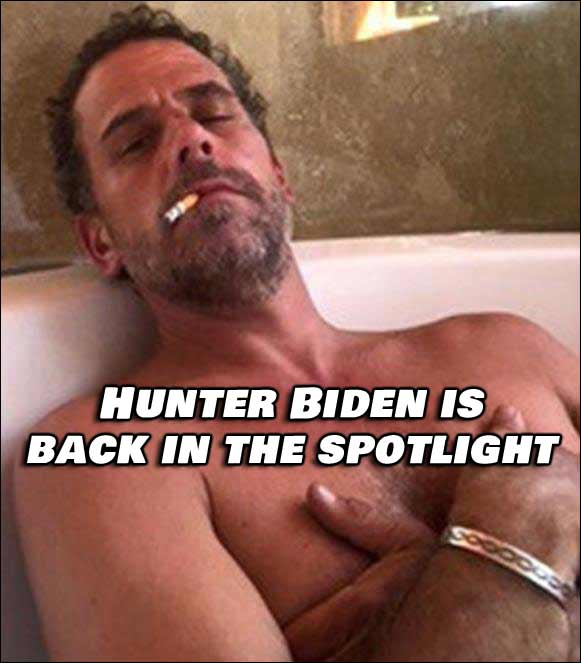 Just when you thought it was safe to read the news and not find something about Hunter Biden, he’s back in the spotlight once again. Just a bit before the election came around, the hot news in the frying pan was Hunter Biden and his infamous laptop. The stories that came out of the laptop situation ranged from sex with under age girls, lots of drugs, mafia type business dealings with other countries including enemies of the United States, along with tens of thousands of images and videos. It was a treasure trove of personal and business information from the life of Hunter Biden (and the Biden family).

The 2020 Presidential election came around, along with a whole slew of voter fraud accusations, and then proving the accusations. All that Hunter Biden interest dropped like a lead ball. The Left went into ‘we won‘ mode, which forced the Right into ‘Whoa! Not So Fast! .. We have proof of massive voter fraud!” mode, and thus that dance began and continues on today. Hunter Biden appeared to be in the clear, at least for the time being.

Now, we all know that Hunter was too egotistical to stay out of the news; LoL. Not that he caused the timing of this, I was just kidding, but here he is, in the news again and this time it was even on a few major news outlets that usually avoid the negative Biden stories. The latest report is that Hunter Biden is facing federal investigations concerning his taxes, and exposure of his links to China. The report also contained information that Hunter’s taxes are being investigated by the US Attorney’s Office in Delaware.

Hunter himself released a statement, “I learned yesterday for the first time that the U.S. Attorney’s Office in Delaware advised my legal counsel, also yesterday, that they are investigating my tax affairs. I take this matter very seriously but I am confident that a professional and objective review of these matters will demonstrate that I handled my affairs legally and appropriately, including with the benefit of professional tax advisors.”

Presidential Candidate Joe Biden’s team released their own statement, “President-elect Biden is deeply proud of his son, who has fought through difficult challenges, including the vicious personal attacks of recent months, only to emerge stronger.“

The tax investigation also ties into allegations of his illegal dealings with China. Money made from deals with China most probably were NOT reported to the IRS by Hunter, thus the multiple inquiries.

You also can see here the attempt and success of the media, and the Feds, to keep this news under wraps until way after the election. If this news was publicly announced BEFORE the election, which it rightfully should have, it may have altered more voters opinions of Joe Biden (and his family).

Thoughts? Drop your comments below.