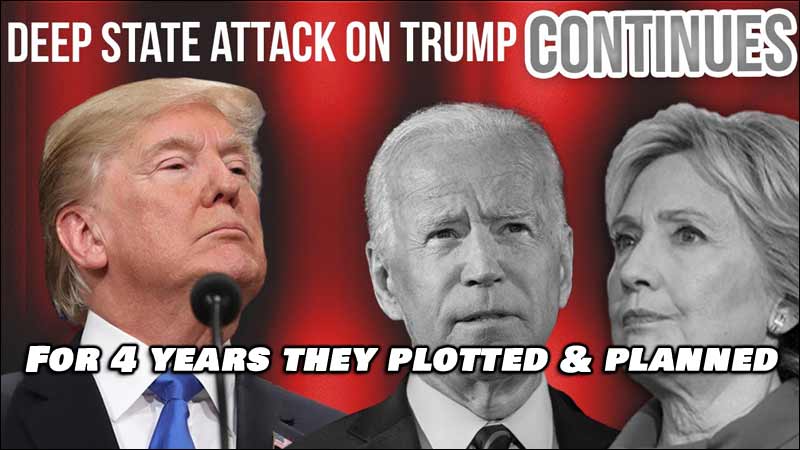 How The Left Has Plotted and Planned for Four Years to Remove Trump.

Hindsight is 20/20, and the enemy is very cunning, but now that they have launched their coup against President Donald Trump, we can clearly see their battle plans. Trump made it through four years in the White House and they weren’t going to give him a second term. Plans for 2020 began immediately following the 2016 election, nine days before Trump’s inauguration.

Dr Fauci said there is no doubt that President Trump will be confronted with a surprise infectious disease two days after the president’s inauguration. Bill Gates spoke at Davos (Switzerland) and warned of a coming deadly pandemic. And illegal surveillance operation was already launched before the election.

President Trump was then subjected to four years of non-stop, baseless attacks and defamation, keeping Trump on the constant defense and the American people distracted while the deep state establishment prepared for the 2020 election.

The covid hoax was in the works years before the election of Donald Trump, but they started fast tracking it. In 2017, Dr. Fauci began the controversial program of manipulating a virus to become more infectious to humans. This is known as Gain Of Function (GOF) research.

In 2018, several CIA agents are elected into public office, claiming their new mission is to foil Trump. In 2019, Fauci committed $3,700,000 to the Wuhan lab in China for a gain of function work on Bat coronaviruses.

In 2019, Dominion voting machines funded by the Clinton Foundation expanded their 1,600 jurisdictions into the state of Georgia. In October of 2019, the Gates Foundation, the World Economic Forum and Johns Hopkins sponsored event to create a tabletop exercise that simulated millions dying from a strain of coronavirus. Two months later, China reports an outbreak of pneumonia in Wuhan, March 13th, 2020 the United States shuts down for covid.

On March 16th, the Brennan Center for Justice releases how to protect the 2020 vote from the coronavirus and suggest mail in ballots, along with other changes to the election. The media puts the blame directly on President Trump.

Fear is injected into the brainwashed masses over an alleged virus less deadly than the common cold. On May 25th, Soros funded violent protests erupt throughout the country for the rest of the summer. Cities burn, businesses are looted and people are murdered in the streets.

The entire platform of the Democrat Party becomes “If you want the chaos to end, vote for Joe Biden.”. In September of 2020, The main stream media began reporting that Trump will refuse to leave the White House when he is beaten in November.

On election night, just as the president begins to surge in critical states, the election is inexplicably halted. Just STOPPED out of the blue. Thousands of mail in ballots appear in the middle of the night, all for Joe Biden. While completely ignoring massive evidence of voter fraud, the mainstream media prematurely calls victory for Joe Biden.

And now agents of the deep state are declaring themselves calling for the president to concede and give full power back to the crooked establishment. If the president concedes the Trump family will be forever destroyed and America will fall into chaos, the only route to victory is to win the election in the courts and go on a massive offensive against the deep state establishment and the Mockingbird media. Those attempting to overthrow the United States need to be executed. The battle is just beginning. God Bless America.

Article Transcribed from an Infowars Video  ….  Opinions?? Drop Your Comments Below.