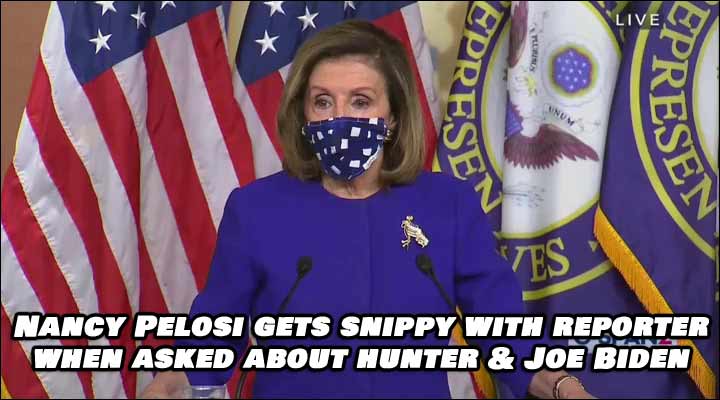 Speaker of the House Nancy Pelosi on Thursday October 23rd absolutely refused to address any questions that arose concerning Hunter or Joe Biden. A reporter asked Pelosi to address a few concerns with Hunter Biden’s laptop and the explosive accusations that have come from it concerning Joe Biden.

The reporter started with “Madam Speaker, the serious allegations of corruption involving Joe Biden have—”

“I’m sorry,” Pelosi proceeded to cut her off. “I’m not answering your questions, okay? We’re talking about the coronavirus—that’s what I … I don’t have all day for questions.” (Watch & Listen to the video below)

The reporter’s questions were made before Nancy Pelosi made a statement about the recent findings that Iran had meddled in the elections.

Nancy Pelosi went on to speak : “The U.S. government has concluded that Iran was behind a series of threatening emails arriving this week in the inboxes of Democratic voters,” The Washington Post reported yesterday. “The emails claimed to be from the Proud Boys, a far-right group supportive of President Trump, but appeared instead to be a deceptive campaign making use of a vulnerability in the organization’s online network.”

“One other subject I wanted to bring up is the subject of the foreign interference in our elections. When I leave here, I will go to a briefing from the DNI and perhaps others,” Pelosi said. “And I’ll be very interested to hear what they have to say in a classified briefing, because everything we have seen in the public domain does not justify the statements that we heard yesterday. We don’t want any foreign interference in our elections from anyone. We think intimidation in the election is wrong, foreign or domestic, foreign or domestic. So to give equivalence to one country and another, when we know that Russia has for a long time, 24/7, in the past election and this one, been there to undermine our election, they try to make an equivalence with China. I take second place to no one in this Congress in my criticisms of China, whether it’s human rights, whether it’s trade violations, whether it’s proliferation of weapons technology that are dangerous and sending it to rogue nations.”

“But the fact—I know what they’re doing, I’ve tracked them every day for 30 years or a little bit more. But in the public domain, you can see that what they are doing is their usual trying to infiltrate the thinking of people in our country to be sympathetic to China, a lot less to do with the elections. Russia is the villain here,” Pelosi continued. “From what we’ve seen in the public domain, Iran is a bad actor, but in no way equivalent, and they always try to find some [equivalence] to protect their friend, Russia. I have confidence in the director of the FBI that votes will be protected, that laws will not be violated. And we don’t want this message coming out from the DNI now to give people any impression that they should be afraid to vote, that their vote will not be counted as cast.”

.@SpeakerPelosi snaps at a reporter asking her about Hunter Biden: “I’m not answering those questions — we’re talking about the coronavirus.” pic.twitter.com/p71CSpq8l2