Georgia Senate Runoff Elections Were Stolen, We Watched It Live

Georgia Senate Runoff Elections Were Stolen, We Watched It Live 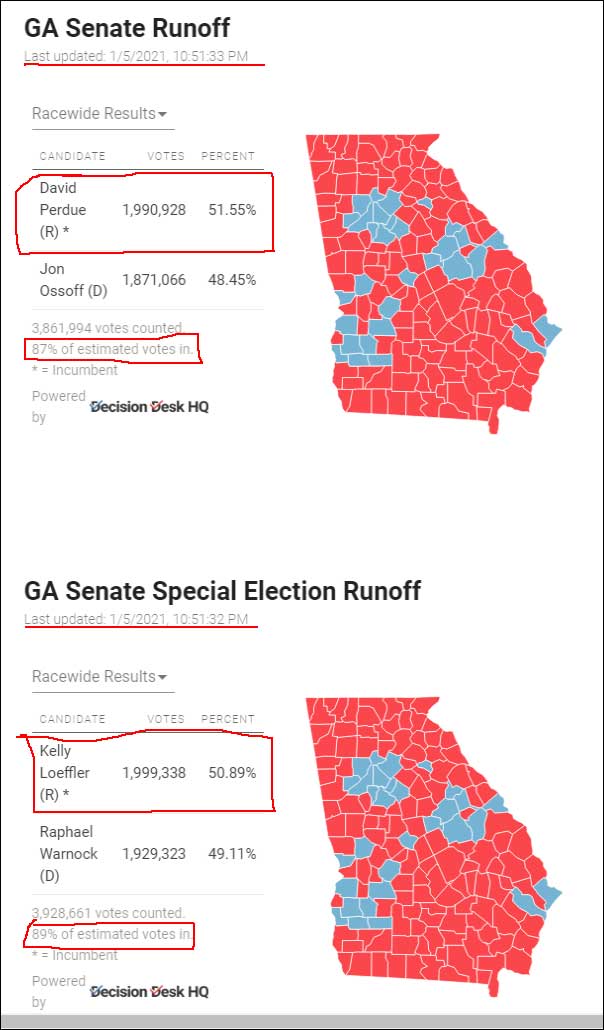 Screen shot from 10:51pm, with approximately 87 – 89% of the votes counted. Notice all the numbers. (Click for full size)

At just about 11pm EST last night, after the polls closed in Georgia for the Senate Runoff and Special Election Runoff, it appeared (again, just like the recent Presidential elections) as if the Republicans were winning. I personally watched myself and did not take my eyes off of the screen. There was 93% of the votes counter. In the GA State Runoff, David Perdue was up by more than 100,000 votes over Democrat Jon Ossoff. In the Special Election Runoff, Kelly Loeffler was up by approximately 70,000 votes over Democrat Raphael Warnock. As I watched, the 93% stood for what seemed like forever. I had just read a tweet by President Trump that said the voting would stop because the Dems need to know how many votes they are behind, then all of a sudden the vote # will drastically change … And they did exactly what Trump said they would.

In this article, there’s a screen shot from 10:51pm, with approximately 87 – 89% of the votes counted. You can see that All Counties are already colored in, which means counting was on the way, and even completed in many of the counties. We can see that in the Senate Runoff, David Purdue was up by 119,862 votes. In the Senate Special Election Runoff, Kelly Loeffler was up by 70,015 votes. Those #’s climbed until the infamous 93% point, where it seemed like counting stopped (the #’s online were NOT being updated) and them BOOM, within moments, all hell broke loose. Perdue lost his entire 100,000+ vote lead, and Loeffler lost her 70,000+ lead. In the blink of en eye. The election ended as the results show in the image below. Dems won both. … Thoughts? Please comment below. 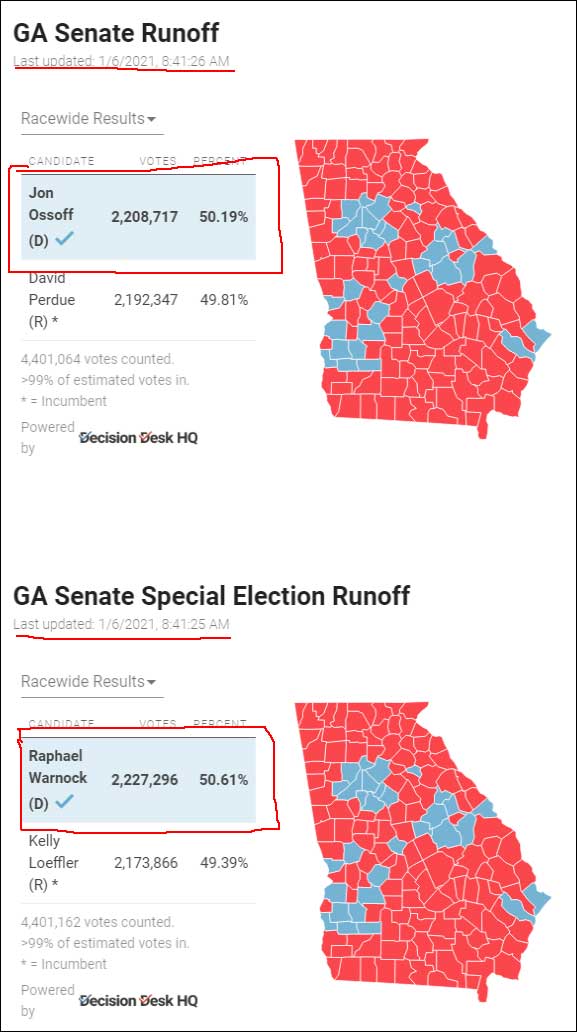 Deborah Kuhn
Reply to  Me patriot

What can be done please tell me

It been stolen again

It’s similar to the presidential election. Mail in votes are counted at a slower pace after the walk-in votes are counted. Most of mail in ballots counted this morning were from Fulton county which went 72% for Biden in the presidential election. They knew this was going to happen which is why Republicans are so against mail-in balloting. The fewer people voting the better chance for a win. There is no steal going on here. All the complaints of the President are refuted. He claimed before the election started that “If I lose it’s rigged” like he was getting ready… Read more »

What do you mean “what’s going on here?”, it counting votes. Is a football game over when it’s 90% done?

You vil notice nothing! Everything is accurate and correct. This is most honest election in history. Like it or you vil face consequences!

BOOM took ten hours, not moments.
The second screen shot is 8:41 am the next day.
But I do think it was stolen.