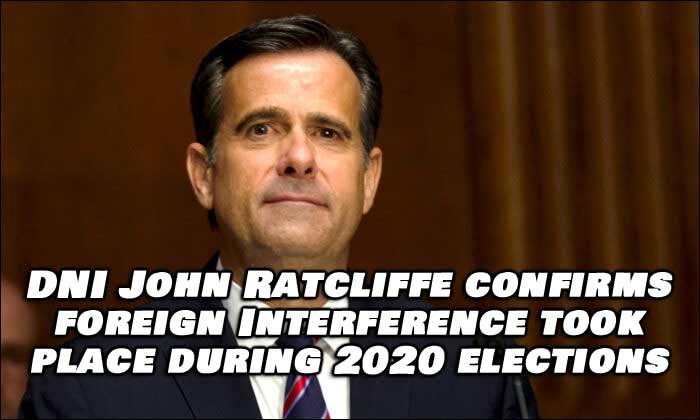 We were all waiting on pins and needles for the report from the Director of National Intelligence (DNI) John Ratcliffe concerning Foreign Interference in the recent 2020 Presidential Elections. Well, it looks like we will have to wait a bit longer. The December 18th deadline will NOT be met. HOWEVER, is has been confirmed that the report will substantiate the claims that there WAS Foreign Interference. It did happen and this is huge, although I am sure we are going to have to wait for the full official report to be released, BUT this opens a HUGE door for President Trump. The fact that there was Foreign Interference with the elections, and that the DNI has confirmed it, it opens the door for the Insurrection Act through the 2018 Executive Order that Trump signed two years ago. That gives any President 45 days after the election to prove Foreign Interference, and then gives him the power to use the Military as a tool to ‘sweep up’ all the evidence. It also allows for Military Tribunals, instead of the normal court cases where we’ve seen lately they lean way left. The trials would be held in Military Courts, not the regular court system.

Because the full official report is delayed, we are not exactly sure how this plays out now that the deadline is one day away. Is a statement from the DNI enough for now? Does it qualify for some sort of extension on those 45 days? … We’re not sure and are trying to confirm an honest answer.

During the interview where all this information came out, Catherine Herridge of CBS said “Well DNI Ratcliffe leads the 17 intelligence agencies and he has access to the most highly classified information that is held by the US government. And he told CBS News that there was foreign interference by China, Iran, and Russia in November of this year and he is anticipating a public report on those findings in January.”

How do you think this will play out? Please let us know in the comments below.

The chicken shit courts have not and will not do anything about it. Pull the trigger Donald Trump. You have one day to do it.
Funny thing is I have not heard any Republicans say “Impeach the MFer.” If nothing else this should allow us to harrass Biden/Harris for 4 years.

What is the reason for the delay?? We The People are getting impatient and so exhausted listening to the Court hearings, etc., etc., etc!!

are they trying to let biden take over even with the interference….why cant they produce a mini report …I smell something fishy going on still

Does anyone have an idea weather the “conclusion of the US elections” would be on the day after the election or when its certified? With states doing “recounts” would the election still be considered concluded?