The following was written by Dakota Phillips, Owner of FitU Coaching : 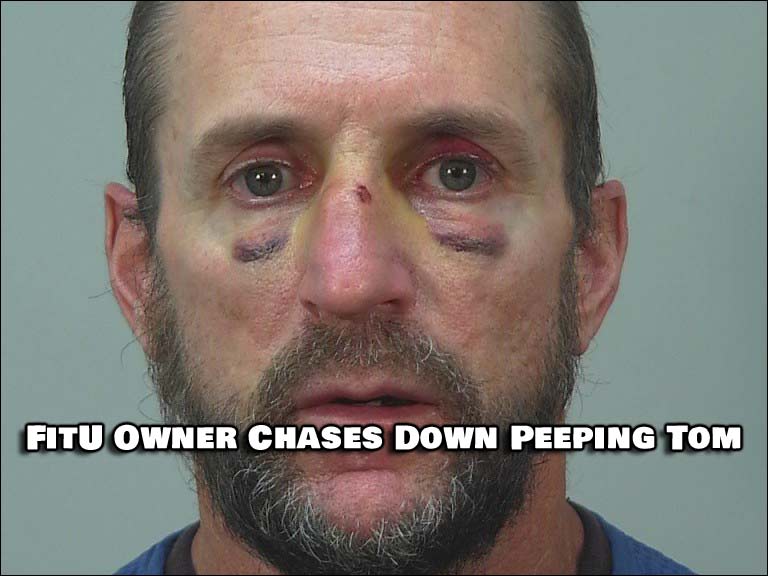 Never thought I’d have to chase down a peeping tom on my one year anniversary. This will be a long post and if you would like to hear how I ran a pervert to exhaustion please continue. My wife, Savannah Phillips, and I just finished celebrating our one year anniversary and I was getting ready to take our dog Penny out for the last time of the night just before midnight, when I thought I saw a face in our sliding door. I turned the light on and it was gone so I thought I was being paranoid. I finished putting her leash on and opened the door to take her out.

As I stepped onto our patio, I looked to my left and about 10 or less feet away was a man in all gray standing against the building. I quickly handed the leash off to my wife and chased after the pervert. He ran for a few blocks and I let off the chase not knowing how dangerous he was and not wanting to get too far from the area. About a minute later my wife and another couple of neighbors came to where I was. We continued looking for the peeping Tom. The others said they had seen him looking into cars and other windows.

Savannah called 911 and reported the incident. The officers said someone would be coming to our apartment to take our statement and we should meet them there. On our way back to the apartment we spotted the man right across the street from our complex. I then continued to chance him over several fences and through much of the neighborhood back yards. Savannah followed and tried to help keep him in the light with her phone flash light. I made sure to yell at him as loud as I could to make sure when the police arrived they would be able to find us.

As I chased him down, I informed him that I could do this all day, it’s nothing more than a light jog for me. I thought it’s a good thing I train for American Ninja Warrior because it’s making chasing him over all these fences pretty easy. Unfortunately, my brand new FitU shirt got caught in someone’s garden and I had to take it off to continue my pursuit. I imagine this is when his real fear sunk in seeing my marble chiseled physique. Eventually the winded perp collapsed from exhaustion. Savannah and I held him on the ground until the police arrived and handcuffed him and took him away. They then took our statements and we returned home. Sore and with stinging feet (in the commotion neither of us had shoes).

So if you too would like the ability to run down a pervert to the point of exhaustion after a hard leg day, check out FitU and I’ll help get you there. (You thought I wasn’t going to connect it fitness and my business, but I gotcha).

The peeping tom’s name is Bryan Lins (See Above Mugshot) ….. Want to Respond? COMMENT BELOW.

VIDEO by Dakota Phillips about the incident :