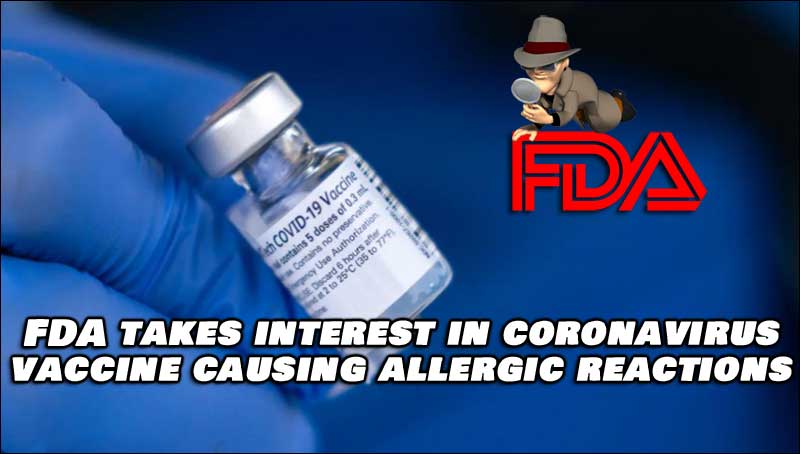 Ever since the Pfizer vaccine was approved by the FDA, it’s been rolled out heavily in many areas. While most people who have received the vaccine have reported no issues, there have been a handful of reported ‘negative’ side effects that have taken place already. We’ve seen the one nurse actually pass out after receiving the vaccine, although that was ‘explained away’ as fear and anxiety. She told reporters later “It’s common for me. I feel fine now.” (Source : https://apnews.com/article/fact-checking-afs:Content:9817674811 ) . There’s been reports of Bell’s Palsy (yes, I know, ALL vaccines share a small risk of Bell’s Palsy as a side effect. But we are now talking about an UNNECESSARY vaccine) (Source : http://unapologeticrepublican.com/covid-19-vaccine-causes-bells-palsy-during-clinical-trials/ )

In Illinois, one medical center halted the vaccine administering due to side effects (Source : http://unapologeticrepublican.com/vaccine-side-effects-cause-illinois-medical-center-to-pause-vaccinations/ ) and even overseas in the UK, there have been reports of serious allergic reactions, and even the CDC warns that allergic reactions are common (Source : https://www.statnews.com/2020/12/13/cdc-says-people-with-history-of-severe-allergic-reactions-can-get-covid-19-vaccine/ ) The CDC themselves say “People that do report those types of anaphylactic reactions to other vaccines or injectables — they can still get the vaccine, but they should be counseled about the unknown risks of developing a severe allergic reaction and balance these risks against the benefit of vaccination.“.

So now here comes the FDA (yes, after they fast tracked the approval) saying that they are going to be investigating now that all these reports are coming in concerning Pfizer’s vaccine for the coronavirus. They have already stated that they are already looking into 5 (five) cases of allergic reactions. These cases are NOT all from the same area, not even the same state. They are also very similar to the cases that were reported out of the UK last week. The Director of the FDA’s Center for Biologics Evaluation and Research, Dr Peter Marks, said “We are working hand in hand with the Centers for Disease Control and Prevention, and we’ve actually been working closely with our United Kingdom colleagues, who of course reported the allergic reaction. I think we’ll be looking at all the data we can from each of these reactions to sort out exactly what happened, and we’ll also be looking to try to understand which component of the vaccine might be helping to produce them.“. He went on to explain that presently, they are unsure of what caused the allergic reactions, but said that the substance ‘polyethylene glycol‘ may be to blame. That substance is found in both the Pfizer vaccine and the newly approved Moderna vaccine.

Two, possibly more’ of the negative reactions came from the same exact hospital located in Juneau, Alaska. The crappy NY Times released a statement about how the allergic reactions happened within moments of the vaccine being injected into the patient, “[The first worker] experienced a rash over her face and torso, shortness of breath and an elevated heart rate. Dr. Lindy Jones, the hospital’s emergency department medical director, said the worker was first given a shot of epinephrine, a standard treatment for severe allergic reactions. Her symptoms subsided but then re-emerged, and she was treated with steroids and an epinephrine drip. When doctors tried to stop the drip, her symptoms re-emerged yet again, so the woman was moved to the intensive care unit, observed throughout the night, then weaned off the drip early Wednesday morning, Dr. Jones said.
…
The second worker received his shot on Wednesday and developed eye puffiness, lightheadedness and a scratchy throat 10 minutes after the injection, the hospital said in a statement. He was taken to the emergency room and treated with epinephrine, Pepcid and Benadryl, although the hospital said the reaction was not considered anaphylaxis. The worker was back to normal within an hour and released.“

Now, the FDA still says the vaccines are safe to take for most Americans. However as stated above, they have issued a warning to anyone that has a history of ‘severe allergic reactions‘. … I don’t know about you, but they can KEEP the vaccine they have set aside for me. I will NOT be taking ANY vaccine, especially one that I deem 100% unnecessary. … Please feel free to comment below.