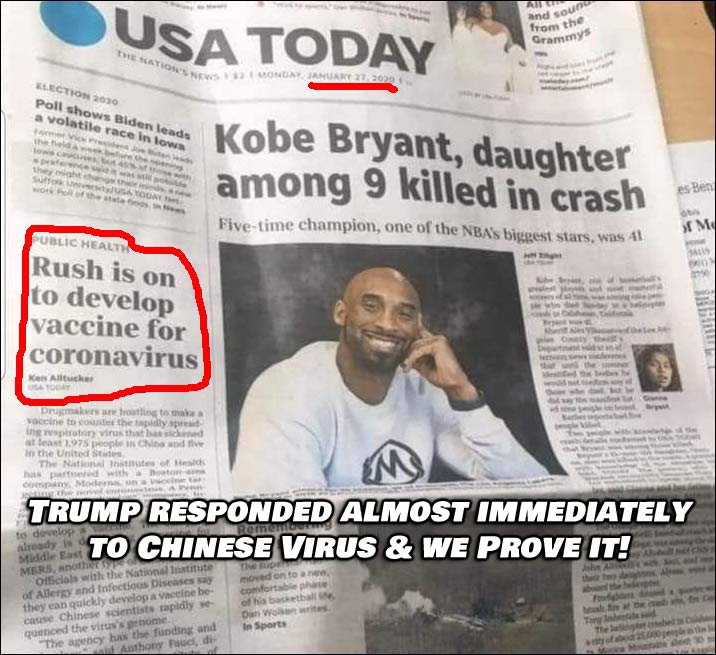 Factual Timeline Proves Trump Responded Almost Immediately To Covid and we prove it!

The USA did not truly find out about virus until late January (27th) (newspaper article and even the WAY LEFT Leaning SNOPES says it is true : https://www.snopes.com/fact-check/coronavirus-cure-bryant/ ) …. It was Barely IN the United States (5 reported cases that we found out later. The first known case in the United States of COVID-19 was confirmed in the state of Washington on January 20, 2020 https://en.wikipedia.org/wiki/White_House_Coronavirus_Task_Force), the article from January 27th mentions China and its 1,975 infected people (that’s how early on this article was, China only reported 1,975 cases so far) ….

TWO WEEKS later, Trump forms the Corona Virus Task Force (actually 8 – 9 days later after the first reported American got it)…. (January 29th : https://en.wikipedia.org/wiki/White_House_Coronavirus_Task_Force ) Trump ALSO said in a statement that the U.S. State Department said Washington would arrange extra evacuation flights from Wuhan with capacity for private U.S. citizens, on or about February 3rd. (https://www.reuters.com/article/us-china-health-usa-wuhan-idUSKBN1ZT103) .. So he WANTED to & did bring home all Americans from the area in China that was the source (Wuhan province).

On January 31st, the Trump administration announced the United States would temporarily ban the admission of people who were in China 14 days prior to their attempted travel to the United States. The restriction took effect February 2nd, and it exempted U.S. citizens, green card holders, and certain other people. … The DEMOCRATS MOCKED HIM. The Democrats publicly said that it was just part of Trump’s ‘Muslim’ ban, which it obviously was NOT, it was solely to stop people from coming in that were coming from the ‘hot-spot’ in China.

“While the United States was not one of the first countries to impose restrictions against travel from China, nor was it late to do so relative to the actions of others,” said Samantha Kiernan, a research associate at the Council on Foreign Relations. “Rather, the United States acted around the same time that many other countries did.” (https://www.statesman.com/news/20200413/fact-check-was-trump-slow-to-halt-travel-from-china)

A whole entire month later, February 24th, Nancy Pelosi was walking around Chinatown in San Francisco with no PPE gear on, no mask .. and she was telling every resident & citizen there that it was all safe .. nothing to worry about. IN FACT she URGED people to come out because it was safe (https://dailycaller.com/2020/03/30/flashback-nancy-pelosi-san-francisco-chinatown-coronavirus-trump/)

So now tell me, WHO was slow? Who’s response was a JOKE?? Who ignored it?? …. Drop your comments below

We “The Silent Majority” need to End all Domestic Terrorism. These Domestic Terrorist organizations in Our Country need to be dealt with First Hand!! As my Momma (GOD Rest Her Soul), would say, “Time to Put Up, or Shut Up!!”