FACT : The U.S. Constitution does not change because of a pandemic 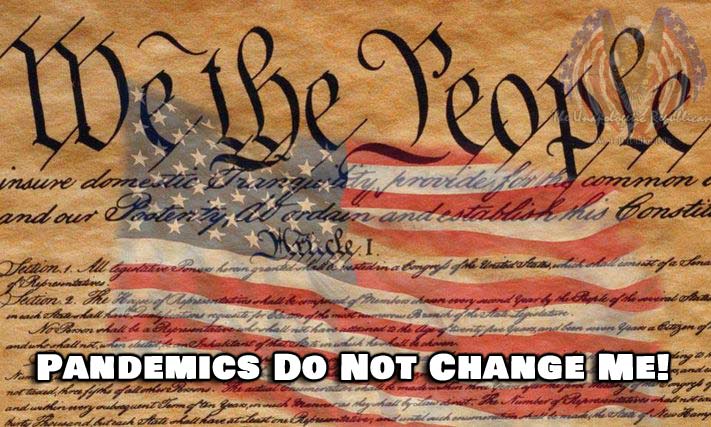 FACT : The United States Constitution does not change because of a pandemic.

Remember, at first the ‘lock-down’ orders were just to FLATTEN THE CURVE. I heard NJ’s Governor Phil Murphy say that every freaking day during his daily briefings. In fact the original statement we were given was that the lockdowns were substantiated under the guise that “fifteen days to flatten the curve” was needed. Well those 15 days came and went real quick and now we are months into it. Some states / cities have eased restrictions, some have tighted them, and some have not changed at all. Some Democrat Governors have already hinted that there will not be a full reopening until there is a vaccine. Not many people realize that the last vaccine to hit the streets took FOUR YEARS. So when you hear some one say that the lockdown will stay in effect until there is a vaccine, that means you’ll be locked down pretty much forever or until that person decides to lift it; Whenever that may be. However, these over-reaching Governors pretty much just got a slap to the face. The DOJ (Department of Justice) just made a statement, one that you would NEVER hear out of the previous Obama Administration’s mouth “There is no pandemic exception to the U.S. Constitution.”

It’s now Memorial Day, and like I just said, some states have eased restrictions, but there are still a lot of legal issues to contend with. The DOJ now has stepped in, and Attorney General William Barr has warned Governor’s of blue states that they may be over-reaching their legal authorities. Especially when it comes to religious freedom.

The Washington Examiner reported “The Justice Department warned California Gov. Gavin Newsom in a letter that his order banning church services puts an “unfair burden” on religious institutions. The letter, sent by the department’s Civil Rights Division, expressed concerns that Newsom’s still undetermined opening date for churches amounted to “unequal treatment of faith communities,” and urged that the governor bump up houses of worship from phase two to phase three of his five-stage opening plan. California is currently in phase two. “Simply put, there is no pandemic exception to the U.S. Constitution and its Bill of Rights,” wrote Eric Dreiband, the lead attorney in a team assembled by Attorney General William Barr to examine religious liberty disputes amid state shutdown orders.”

The Department of Justice also questioned why can’t churches open and obey social distancing if they are allowing what they call essential businesses to stay open. If a business can open and operate while observing social distancing, then why not a church or a house of worship? The DOJ stated “This facially discriminates against religious exercise. California has not shown why interactions in offices and studios of the entertainment industry, and in-person operations to facilitate nonessential ecommerce, are included on the list as being allowed with social distancing where telework is not practical, while gatherings with social distancing for purposes of religious worship are forbidden, regardless of whether remote worship is practical or not.” … Hopefully sensibility will prevail and houses of worship will reopen, especially since President Trump just declared houses of worship as essential. I LOVE MY PRESIDENT! …. COMMENT BELOW