Facebook’s Banning of Conservatives is Running at Full Throttle

Facebook’s Banning of Conservatives is Running at Full Throttle 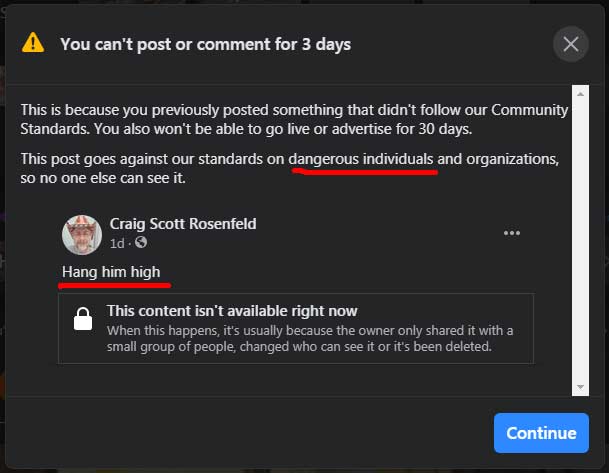 Facebook’s Banning of Conservatives is Running at Full Throttle!

I don’t consider myself as a lunatic conservative and I am definitely not a threat to anyone that has different political beliefs as I, but that’s not what Facebook thinks of me. I shared a post that stated how Russiagate has finally been tied back to Obama. Yes, the fake Russia Collusion story was started by Hillary Clinton, we now know that due to the release of the hand written notes of John Brennan. We also know for a fact that Obama and his administration was briefed on it. The FBI and the CIA also knew it was faked, but they all ran with it and allowed it to continue and grow. OBAMA KNEW and there’s no doubt about that. (Source : well, there’s TONS, but here’s just one : “Caught Red Handed: Brennan’s Handwritten Notes Prove Obama Was Briefed on Scheme to Set Up Trump“) … If you didn’t know, it’s called TREASON.

So when I shared the post, the article had a picture of Obama sitting in an electric chair (due to the fact that he was just proved to be a traitor and committed treason). I added my own note that said “hang him high” meaning to hang the traitor. In the United States, if you’re found guilty of treason, the law is as stated “Whoever, owing allegiance to the United States, levies war against them or adheres to their enemies, giving them aid and comfort within the United States or elsewhere, is guilty of treason and shall suffer death, or shall be imprisoned not less than five years and fined under this title but not less than $10,000; and shall be incapable of holding any office under the United States.” … It says right in it “shall suffer death”, so my point still stands … “Hang Him High”. So, I was NOT promoting violence (Obama did that himself when he knowingly committed TREASON) and I am certainly NOT a ‘dangerous individual’, however, that is how FB sees me. A ‘dangerous individual’ because I want to see a Traitor to the United States of America held accountable for his actions. I still 100% stand by my comment to ‘hang him high’. In fact, everyone tied to the whole Russia Collusion lie, everyone who pushed it knowing it was false, should all face the crime of Treason. I wish they’d bring back the firing squad so they can all be dealt during the same process. Line ’em up and drop each traitor where they stand. …. Thoughts?? Comment Below.