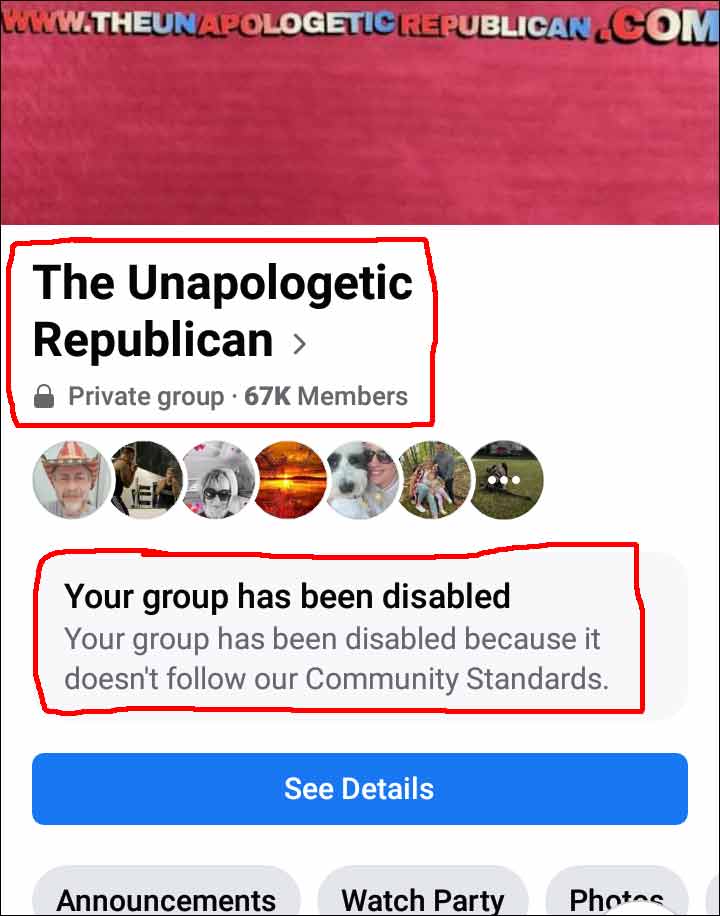 Well, it finally happened. Facebook’s Gestapo Arm just reached our Facebook Group ‘The Unapologetic Republican’ and completely shut it down. Now we already knew that FB was on a conservative cleanse, but we thought it would only hit & hurt the ‘big boys’, but that’s not the case. In fact we still see large conservatives on Facebook. Pamela Geller, Dan Bongino just to name a couple.

But why would Facebook target us, a group of 67,000+ conservatives when there are much bigger fish to fry? My thoughts are that the ‘bigger fish to fry’ also has deeper pockets than we do. We can not easily whip out $10,000 for a retainer for an attorney. Those other ‘big boys’ can. Facebook figures if they remove the smaller guys, they don’t have the resources to fight back, thus our removal from their platform. 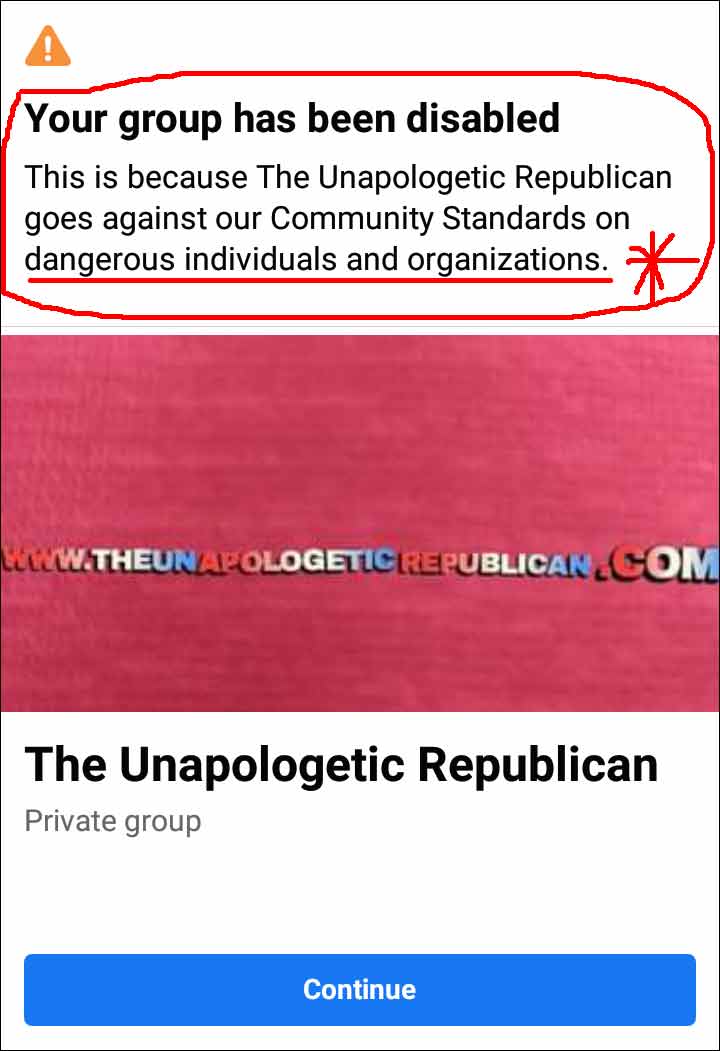 Check out the reason FB gave us as to why they shut the group down. (Click for full size)

What reasoning did Facebook give us? Nothing of any substantial value. Nothing that I believe would hold up in a court of law. I see 1 or 2 reasons that they told us, and you can see it in one of the screen shots I posted in this article. They said “The Unapologetic Republican goes against our Community Standard on DANGEROUS INDIVIDUALS AND ORGANIZATIONS.” … OK, first off, we are neither of those, and there is NO WAY IN HELL that Facebook would be able to back up that statement in a court of law. Also note, that IF we actually WERE a group of ‘dangerous individuals’, wouldn’t it be Facebook’s responsibility to alert the authorities?? I know I am reaching, but if FB ‘knows’ we are ‘dangerous’, but tells no authority figure (police, etc), and we go out and commit murder or some horrific crimes, then isn’t Facebook partly responsible? I mean, they 100% believe that we are all ‘dangerous individuals’, but they just keep that info to themselves?? Makes NO SENSE other than they just targeted us because we are THEIR RESISTANCE.

So, FUCK FACEBOOK. I have a feeling Zuckerdick’s future is at stake anyway. Section 230, and his over reaching of being a ‘platform’ will end up destroying them. Just like what happened to Microsoft, the feds will eventually force the company to break up. At least that is what I believe. … If you want to find our NEW GROUP PAGE for The Unapologetic Republican, we are giving MeWe a shot! … Find and Join us at this link : https://mewe.com/join/unapologeticrepublican … We hope to see you there soon!

Statement from our Founder & Admin Taylor Soddy : “I feel like Facebook just took two years of my life away after spending a few hours minimum everyday advertising to get new members. It is unfortunate that they believe Republicans are dangerous people and need to be silenced. This is not the tolerance that the left preaches to us.“

Have an opinion on this?? Please feel free to comment below.

Fuck Zuckerberg and the rest of the left wing Nazis

Hang in there ! We can rebuild and we cannot give up and let our country become Argentina or Iran. We cannot shut up. I think we need to work as hard as they did to build Of course we won’t burn cities down, destroy, commit crimes, police brutality to brainwash the clueless but we can change this mail in vote BS and change computer systems , have our own media station , do commercials and ads with info., increase voter base, have national voting rules, poll workers validated and equal number of dems and conservatives counting or recounting, observers… Read more »

Yep! I was shot down a few days ago trying to forward some links to my FB page. One of them – probably the one about Communism – triggered a response saying the content violated their Community Standards. We all need to forget FaceBook and let it go down in it’s self created spiral of death. There are other Social Media and platforms out there just waiting to grow. Good Luck!

that’s because if it isn’t good stuff for the democratic party, or against the republican party, then it’s not allowed.

I bet they dont shut down Democratic Crap. So, therefore Facebook is going against their own policies, by only allowing stuff from 1 party only. We all need to have a say in this, no matter what party you are with. Facebook is supposed to be a SOCIAL NETWORK, which means anyone from any country, race, party, etc. See facebook is racial, 1st you can only be democratic, next its going to be a race or sexual orientation.