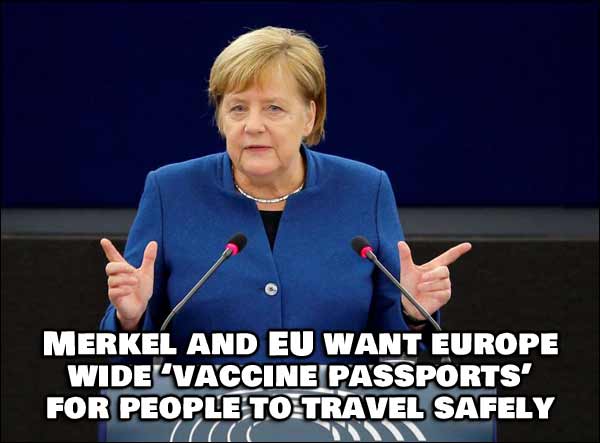 They said it would never happen. We were promised that we would NOT require any sort of ‘vaccine card’ which would prove that we’ve gotten the vaccine for COVID-19. We already need a mask to pretty much go anywhere, so I guess the liberal loons are thinking ‘why stop at that?’. Their fear mongering has worked up until now, so why not continue to use it? So here comes a statement from Germany’s Angela Merkel (Chancellor of Germany), “We have all agreed that we need vaccine certificates.” The state come right after the European Commission met to talk about the possible need for what is being referred to as ‘vaccine passports‘. Merkel went on to elaborate a bit, “In the future, it will certainly be good to have such a certificate but that will not mean that only those who have such a passport will be able to travel; about that, no political decisions have been made yet.”

Merkel explained it would take about 3 months to implement the plan (a vaccine passport system) and continued, “This will make travelling within the EU possible and could pave the way for further travel from third countries into the EU.” She also stated that she believes Big Tech will begin to get themselves involved or try to implement their own similar systems, such as companies like Google and Apple, so she wants to beat them to the punch. Commission President Ursula von der Leyen helped Merkel stress to other membering states that they need to do this now before Big Tech gets involved, and it should be a Europe Wide system that encompasses all of Europe. The Commission President used Israel’s present system as a model example. Israel has in place what they call the ‘Green Pass‘ system. That system uses as a domestic internal document, which allows denying entry for the unvaccinated to public areas including sporting events, restaurants and hotels.

The plan is not fool proof though, one issue still stands out and the Commission leader even stated it, “It is unclear whether you can transmit the disease even if you are vaccinated.”. We already know that there’s been several cases of people getting vaccinated, and then two weeks later testing positive for the China virus; (see our article http://unapologeticrepublican.com/after-two-doses-of-vaccine-people-still-got-infected-with-covid/ ) . So the entire point becomes moot if the vaccine does not completely help prevent you from getting the virus in the future. I don’t see the point in getting a vaccine that seems more dangerous than the virus itself. What are YOUR thoughts? Do you think a similar ‘vaccine passport’ system will be implemented here in the United States? We already have had restricted travel between states. Will ‘paperwork’ proof be the next step the liberal loons take next? .. Please feel free to leave your comments below.