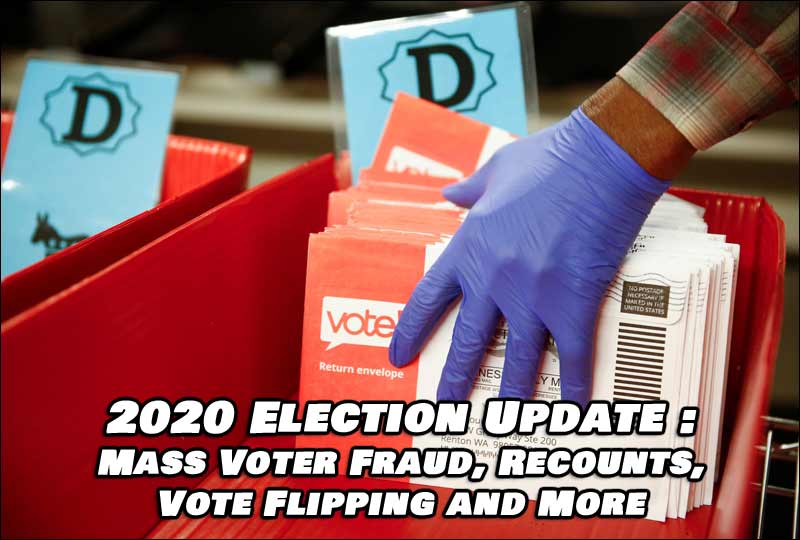 1. The State of Georgia announced the manual recount of all votes. Why would they do this? Because Joe Biden was leading by more than 12,000 votes, yet 4,000 more are not counted, and 8,000 more absentee votes by overseas soldiers are still on the way by mail to reach their destination to be counted. This recount is very important because it is manually counted one by one, which will expose the problems of each county. The recount is also overseen by both Democrats and Republicans. For example, a box of 30,000 ballots, all voted directly for Joe Biden. Nobody knew if there were exactly 30,000 votes or not, so recounting of votes gives Trump a HUGE chance of flipping the state. The recount first looks at the number of votes, then looks at the legality of each ticket. It’s all presented in front of a chief justice, in which a decision is made whether or not there is enough evidence to move forward or not.

2. A. If the recounting of the votes is done by hand, and monitored by others, then we can avoid machine software errors.
B. A manual recount will show whether or not there is false data being thrown into the results. If a manual recount of votes shows more votes than registered voters, we know something wrong happened. If Trump wins the election by recounting the votes, there will be no need to go through any legal proceedings, even though the truth will eventually come out anyway.

3. Since recounts have begun, have they found any additional votes for Joe Biden, or are they all for Donald Trump? From everything that has been reported so far, not 1 single recount vote anywhere has been for Joe Biden, They have only found votes for Donald Trump. Which seems impossible to happen unless there was some human intervention. If Trump cheated, then why would all the ‘new found’ votes being found now are all for Trump? If he cheated, those ‘fake votes’ would have been counted the first time around; Like they did for Joe Biden.

4. Trump (and others) pointed out a major fact that at some counting stations (in Pennsylvania and Michigan), the ‘watchers’ were NOT allowed in to watch the original counts, or the recounts. Which is an immediate violation resulting in a LOSS for the side that committed the infraction. This actually resulted in over 100,000 votes NOT being counted, and guess who they were all for? That’s right, all for Trump. This alone, once adjusted correctly, would give Trump the win in BOTH states.

5. Once the Left saw the strength and numbers supporting Donald Trump for re-election, they began to ramp up their cheating methods to guarantee themselves a win. But it backfired majorly because they cheated TOO MUCH, and it’s pouring out all over the sides.

6. Multiple State Attorney General’s have been meeting with McConnell at the same time Rudy Giuliani tweeted about a whistleblower from Dominion (Voting Software) coming forward.

7. The Speaker (Mitch McConnell) is the highest authority before the election results are disclosed. McConnell recently stated that “this election is not just about electing a president, it’s about the rights of all Americans and the dignity of the Constitution.”

8. Mitch McConnell is also meeting with the top leaders of multiple national foreign intelligence agencies. Domestic judiciary investigations have begun, which means that they are investigating voter fraud in conjunction with these other agencies.

9. There is so much fraud, and so many entities involved, but Trump and his legal team promise that all will be investigated. This should send an important message to those trying to cover up the fraud, that it’s not just Trump that wants the truth, but also every single red blooded American wants to know too. We demand a legitimate and fair election process. This following things need to happen :
A) reduce the existing vote count gaps around the country by recounting and flipping;
B) go through lawsuits to plug the loopholes in the election for years to come;
C) find the organization(s) behind the crime(s); and
D) find out where this organization is controlled from. Overseas? The CCP? Within America? or a combination of them??

10. Recent Fox News Interviews with different State Attorneys revealed :
A. Trump has filed lawsuits against the illegitimate vote counting in Pennsylvania and Michigan
B. Ballot fraud facts discovered: the same batch of ballots were brought into two states at the same time
C. Illegal and unfair vote counting occurred in at least four states. The President and others called on every informed patriot to come forward and expose the truth
D. CCP is heavily involved in all aspects of voter fraud in the American Elections. This is known and encouraged invested by the likes of Nancy Pelosi and other Democratic bigwigs.

11. Give it some time. December 8th is still quite some time away and it’s plenty of time for the truth to come out about all the voter fraud that took place in the 2020 Presidential Elections of the United States of America.

Opinions?? Please drop your comments below.