Over in Pennsylvania, they have this top medical expert that’s been in the public eye much lately due to the Chinese Coronavirus. Dr. Rachel Levine is the state’s top health officer, the Secretary of Health. She’s also professor of Pediatrics and Psychiatry at the Penn State College of Medicine. She’s a Harvard graduate, a Tulane graduate, and has an incredible resume. She is a wealth of knowledge and a proven educator. She’s know for a plethora of things, but she’s very well known among the LGBTQ community for her efforts and advocating on their behalf. She’s also tied into trying to control the opiod problem that so many Americans are dealing with. She’s fought for LGBTQ equality with Healthcare, insurance, and several other areas. She recently was named one of NBC’s Pride 30, which honors her for making a difference in the lives of people within the LGBTQ community.

Now comes along Marty Griffin, who is a talk radio host on AM radio for Pittsburgh’s KDKA-AM radio station. During a recent interview between Griffin and Dr. Levine, the radio host asked “When folks know what yellow is kind of sort of but they don’t even know what green is because you don’t. What’s the end game, sir? Where do we get to the point where folks can be confident they can conduct business if they do it safely and there’s no time frame and there’s no window? Correct me if I’m wrong, sir … ma’am.”. There was a moment of silence and no response from the Doctor, so Griffin dug in “How do you respond, doctor, to the conjecture that your response is jeopardizing the health and well being of seniors by moving them into nursing facilities even if they’re no longer COVID positive, sir?”. Dr. Rachel Levine responded “Please don’t misgender me. That was really insulting.” 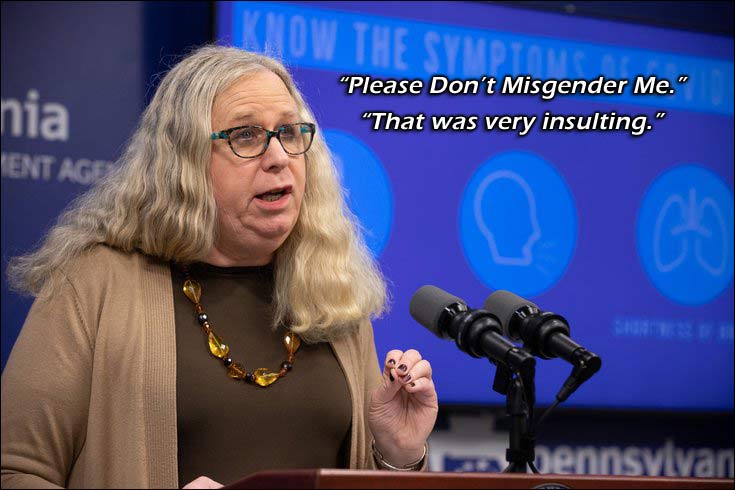 
The radio host apologized profusely, saying it was an honest mistake, and not done intentionally. It still didn’t sit well with the Secretary of Health, and she continued on to let him know that she was insulted. Griffon later hit up twitter to apologize again “I apologize. I apologized twice. I truly did. It was not intentional. It was not. I was not focused. I was doing six things at once.”

Doctor Levine has been through some really rough times lately, especially since she’s hit the spotlight as Governor Wolf’s go-to person on advice for the coronavirus. Doctor Levine originally comes from Boston, was born a man, who was named Richard Levine. Levine made the sexual changeover from a man to a woman back in 2011. Two years later she got divorced from her husband and focused on her work. She went on to graduate, as mentioned above, from Harvard and Tulane, and to score a great position from Governor Tom Wolf. … Comment Below

Proof that you can be incredibly well educated and still ignorant.

No matter how he dresses, how large his breasts are, and how much makeup he wears, he is a MAN! That guy will NEVER be a woman. I’m so sick of this crap.