Donald Trump Starting Own Political Party, We Have Paperwork Proof

Donald Trump Starting Own Political Party, We Have Paperwork Proof 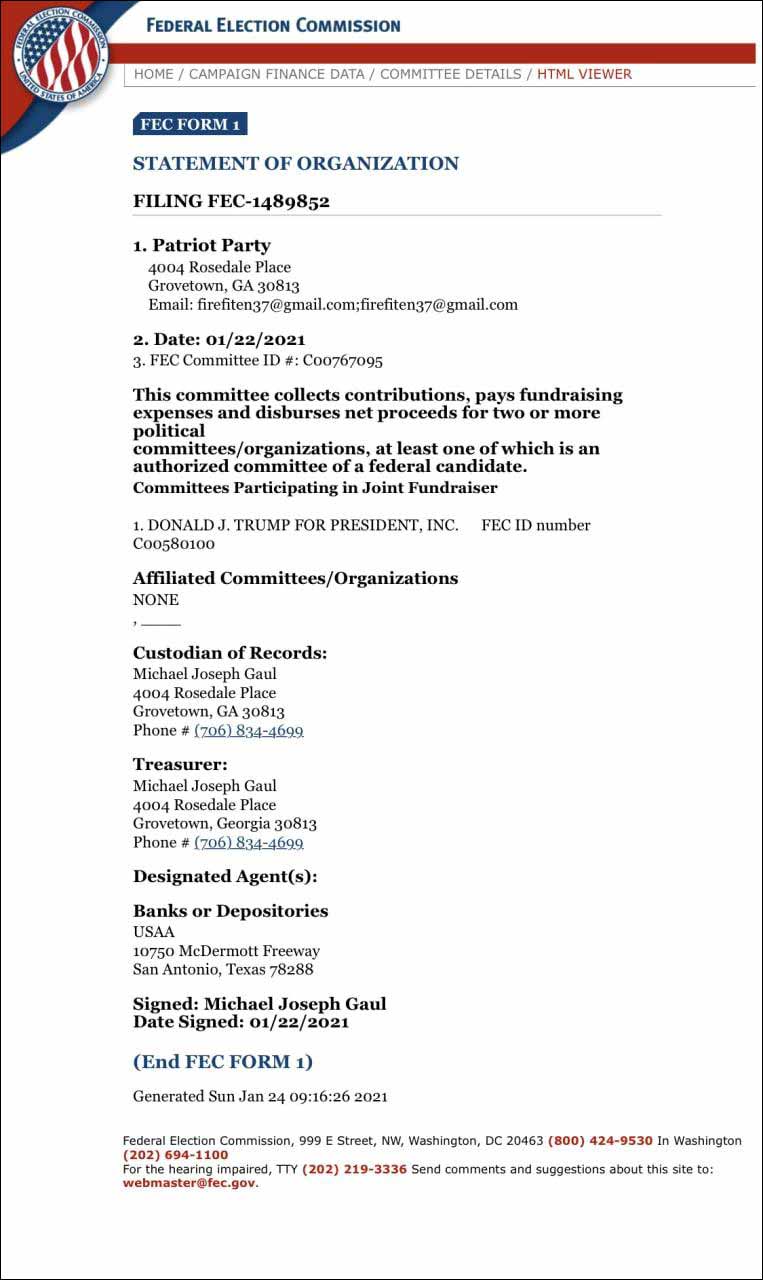 **Update: According to Newsmax this morning (25th), Trump has backed off of this idea and will ‘Primary Never-Trumpers’. Talk was that the split from the GOP would actually help the Democrats in the long run.**  …. After a good portion of Republicans recently turned their backs on President Trump, it only seems right to do the same to them. It appears as if today’s GOP is not the same as it used to be. It’s been infiltrated by moles and traitors, many of them outright RINOs (Republican In Name Only). We’ve seen their true colors and they are no better than most of the Democrats. American people have also lost faith in today’s Republican party, they too feel betrayed. Many people have spoke out about walking away from the party, and some have even gone as far as to already change their political affiliation to ‘independent’ or ‘undecided’. That is how angry and upset conservatives and Republicans are. So angry that many of them, including Donald Trump, have mentioned starting their own political party, and it seems as if Donald Trump has done just that.

On January 22nd 2021, a FEC Filing was made, filing # FEC-1489852, which is a filing for a new political party named the “Patriot Party“. It was filed by the organization known as ‘Donald J. Trump For President, Inc.‘. That incorporation is located at 725 Fifth Avenue in New York City. The organization was formed back on March 4th, 2020 and that ‘statement of organization‘ form can be found here : https://docquery.fec.gov/pdf/510/202003049203747510/202003049203747510.pdf and you can see on the paperwork that the authorizing candidate was ‘Donald J. Trump’ who at the time was listed as ‘Presidential candidate Republican Party’. On the website of the FEC, ‘Donald J. Trump For President, Inc.’ and their collected contributions are listed (this is just to confirm to you that the Incorporation 100% does exist) and can be found here : https://www.fec.gov/data/committee/C00580100/?cycle=2020 .

The January 22nd 2021 filing for the Patriot party can be seen in the image above, but the actual source link is here : https://docquery.fec.gov/cgi-bin/forms/C00767095/1489852 . .. So from all accounts, it does appear that Donald Trump is starting his own Political Party. I know one thing for sure, there’s at least 70+ Million people that will be considering leaving their present political affiliation to switch over to be a member of the Patriot Party. .. Will you? Drop your comments below.

GREAT IDEA LETS GO FOR IT

FYI, I WILL NO LONGER SUPPORT THE G.O.P. THEY ARE NOW WAY UNDER THE BUS, YOU BACK STAB ME ONCE SHAME ON ME BUT TWICE SHAME ON YOU.G.O.P. GONE. PATRIOT PARTY OR I JUST DON’T VOTE.THAT SIMPLE

Been a republican my whole life .my first time voting at age of 18 i voted REGON I NOW LEAVE THE PARTY AND AWAIT TO JOIN THE PATIOT PARTY

need to get Patriot First hats and bumper stickers out NOW@@@ I’ll wear the hat and put the stickers on every thing I own. Patriot Party Flags will fly in every yard and!!! God help those who try to deface them!!!

A third party will split the loyal GOPs and dilute the results.The Dems will always win.

Very interesting and intelligent comment. Really made me think about this issue.

While true, it does not reflect that a significant number of the R’s are indeed RINO’s and have turned their back on America, and Americans. The R party is going to crash and burn, and that may be what needs to happen, to get people elected that put America 1st, not their own personal interests

Normally I would agree, but this election and the last 4 years has been unprecedented. We have been absolutely ripped apart by the media and social media. Have lost our free speech and censored to a close to communist degree. We were always told our voice in our vote. But we have lost that as well with blatant election fraud that the media calls “conspiracy theories” Antifa acting as Evil Trump supporters at the Capital and every riot to make us look like the violent ones. And the media not caring about who the actual evil, violent ones are. The… Read more »

I am 100% with President Trump! Screw the Republican Party!

I believe that they already have. It takes time to hold Military Tribunal Hearings.

Yes, I will gladly join!

If everyone of the 75 million would contribute just $10 the party would have plenty to get started. C’mon man where can I contribute.

I support the forming of the Patriot Party and will leave the GOP.

I will absolutely support The Patriot Party. I have and will always support my President Trump unapologetically.

I’m definitely on board with the Patriot Party. I have seen the GOP & will no longer be classified as a republican.

I support TRUMP, The Patriot Party, GOP has seen the last of my support! They called today for a contribution, I told them I was done!

Absolutely 100% behind the most patriotic president in my life time .. all about WE THE PEOPLE !!!

All in on the patriot party! Lets go