Does Facebook really Put Restrictions on Conservative Accounts? Dam right, and we can prove it! 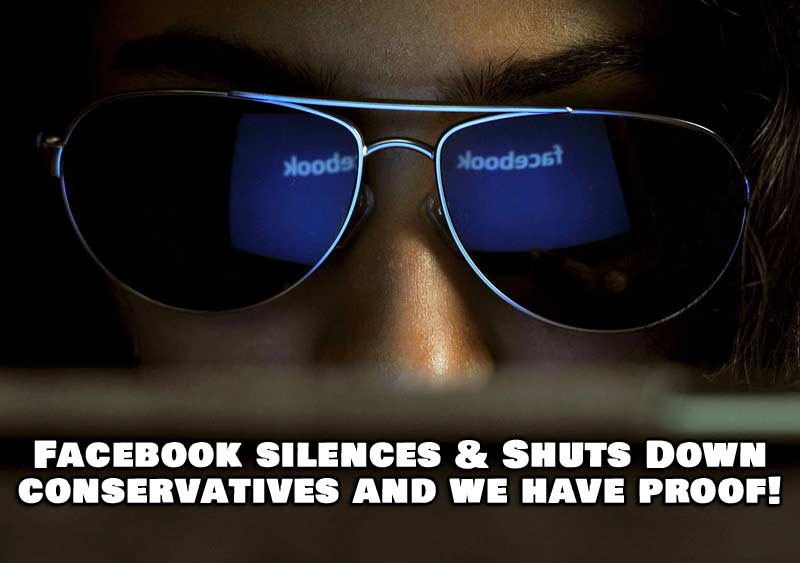 Facebook silences & shuts down conservatives, and we have proof!

When Facebook first came out, WOW, what a cool thing! We could make a post about our family, our pet, or just about any information, even political, and it would be shared to all you friends and family. If you have your publishing settings on PUBLIC, then Facebook, via algorithms, would also show your post to others that are not in your Friends list. It was a wonderful way to share good/bad personal news & interesting topics, and it would get seen by a good number of people. Facebook calls that ‘Organic Reach’. Since then, however, Facebook has changed their algorithm methods thousands of times, and now uses both Artificial Intelligence, and real ‘detectives’ to hunt down accounts, posts, comments, pages and groups that go against their own personal beliefs. Facebook considers themselves the same as a retail store, in the way that “it’s my store, so my rules go”. Which is OK in general, but not cool when you pick a political side, and then shun and muffle the side you disagree with.

Over the last 17 months, Facebook has been a very productive tool for me. I work diligently on gathering members and growing my Facebook group ‘The Unapologetic Republican‘. When I first began my group, for the most part I felt like I could say whatever I wanted, without fear of censorship; I thought Freedom of Speech ruled. Unfortunately, in the last few months, Facebook has proved the total opposite. Yesterday, for example, I was messaging my friends an article which I had just written concerning Joe Biden. After I sent the message out to maybe 15 or 20 people, the next time I tried I received a message that Facebook was restricting my right to send messages temporarily. Throughout the next hour I kept checking back in hope that I could resume messaging, but NOPE! The Facebook Gestapo was at full throttle. I had to wait until 10 hours later when I could finally resume my conversations. No big deal, you may think; he can still post his articles on his Facebook group. WRONG!!! Yesterday Facebook would not let me (or Craig, a moderator of mine) post our article to The Unapologetic Republican. We had another group member try, and for some reason she WAS ABLE TO share it, but both Craig and I were restricted. I have also noticed serious limitations in post viewership specifically where as if I type in a link to our website in my post, it will not show up on anyone’s news feed. To counteract that I was commenting a link to the post in various group posts, and after letting 5 or 10 members know, Facebook took away my ability to comment post links in the group. At this point it feels like no matter how much I try to get my word out (the thing I used to love most about my group) Facebook has an answer as to how they will fight back and silence me. As major news outlets like Fox begin to slide over to the Left, Facebook seems dedicated to making sure that no major conservative outlet can make it big on their watch. However, I am committed to putting in the man hours to make it happen. Please subscribe to our website and help us keep the dream of removing the liberal bias from the media alive. … Pissed off yet?? .. COMMENT BELOW.