Did You Know? Over 30 Amazing Things President Trump Has Accomplished

Did You Know? Over 30 Amazing Things President Trump Has Accomplished. 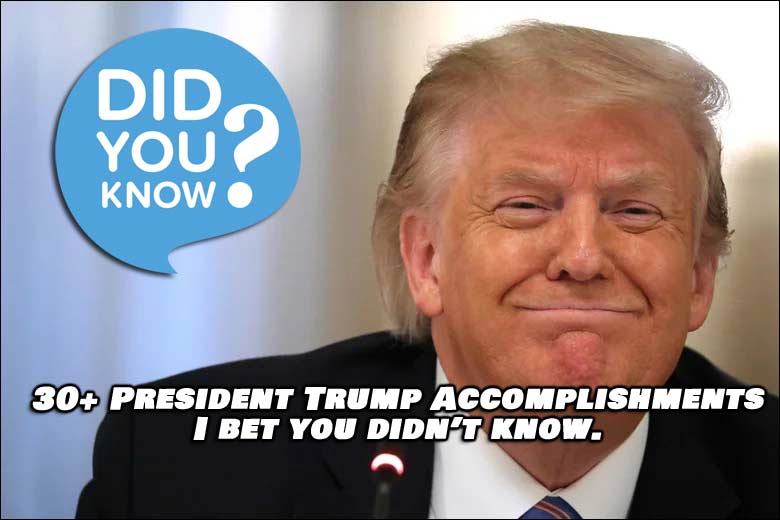 Did You Know? Over 30 Amazing Things President Trump Has Accomplished.

I bet you didn’t know many of these. Any of these can be confirmed by looking them up. Don’t GOOGLE them, use DuckDuckGo.com. (Screw Google!)

Trump Created a White House Hotline for Veterans. On May 14, 2019, Trump created a hotline serving veterans, their families, caregivers & survivors. He staffed it with veterans & their direct family members.

Trump signed & approved the Save Our Seas Act. On October 13, 2018, Trump signed into law a bill which provides $10,000,000 per year to clean our oceans from tons of garbage and plastics.

Trump increased funding for Historically Black Colleges & Universities. On December 19, 2019, Trump provided more than $250,000,000 per year to the nation’s historically black colleges and universities, along with dozens of other institutions that serve large shares of minority students.

Trump prioritizes HBCUs in the White House. On September 18, 2017, Trump created the position of executive director of the White House Initiative on HBCUs. Something HBCU’s always wanted but no other President did it for them.

Trump received the Bipartisan Justice Award. The award was given to Trump on October 25, 2019 at a Historically Black College for his role in advocating for criminal justice reform.

Trump signed a bill legalizing Hemp & CBD. On December 20, 2018, Trump signed the farm bill, legalizing the production of hemp and CBD at the federal level.

Trump is the first President to expand our military into space. On December 20, 2019, Trump finalized the creation of Space Force as the USA’s 6th military branch.

Trump signed 3 bills affecting Native Americans in a positive way. 1 – Gave compensation to the Spokane Tribe for loss of their lands in the 1900s. 2 – Reauthorized funding for Native language programs. 3 – Gave federal recognition to the Little Shell Tribe of Chippewa Indians in Montana.

Trump signed the biggest wilderness protection and conservation bill in a decade. On march 12, 2019, Trump designated 1.3 Million acres of federal land in California, Oregon, Utah and New Mexico as wilderness, the highest level of protection, in which logging, oil drilling, mining and road-building are banned.

Trump signed the Right To Try Bill. On May 30, 2018, Trump passed a law allowing all terminally ill patients the right to try experimental treatments not yet approved by the FDA so they have a fighting chance to live.

Trump signed an executive order forcing all healthcare providers to disclose their prices so Americans can comparison shop. On November 15, 2019, Trump forced hospitals and insurers to disclose negotiated rates or face fines. He said no patient should be blindsided by bills for medical services they never agreed to in advance.

Trump started a program providing HIV prevention drugs for the uninsured. One of Trump’s biggest goals is to eradicate HIV in America by the year 2030. The drugs he’s providing prevent HIV through sex by more than 90%.

Trump called out Congress for making education unaffordable. In January 2020, Trump announced his push for school choice, ensuring no child would be trapped in a failing school because of his / her zip code. The move would help students and families pay for tuition at private schools and other alternatives to traditional public schools.

Trump signed the 9/11 Victim Compensation Bill into law. On July 29, 2019, Trump approved a law which permanently funds the police officers, fire fighters, and other first responders who suffered harm or were killed because of the 9/11 terrorist attack.

Trump signed the USMCA Agreement, paving the way for a job market boom. On January 29, 2020, Trump signed the US, Mexico, Canada Agreement, the biggest trade deal of all time which covers more than $1.3 Trillion Dollars of commerce and brings manufacturing jobs to the United States.

Well, I know the haters will try to argue a lot of these FACTS, but let them. We all know the truth and we don’t need a nod from anyone on the Left to comfort us. Haters gonna hate.  … Opinions? .. Drop your comments below.

He wasn’t perfect and he did need to stop “tweeting” … that worked against him. But he is a great man who really loved the USA and did not receive a salary for serving as president. His accomplishments will go on and we will all profit from them; we are already!